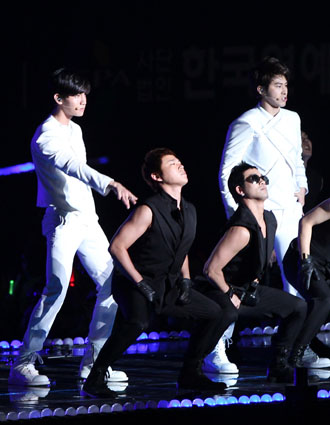 In less than a week since the launch of its DVD, TVXQ landed at the top of Oricon’s weekly DVD chart.
More than 151,000 copies of “TVXQ Live Tour 2012- Tone” have been sold since July 25.

The DVD in question captures the Tokyo leg of the duo’s Japan tour which kicked off in Yokohama in January and ended in Osaka on April 23.
The tour comprised of 26 performances and drew in a crowd of more than 550,000.

According to Oricon, this is the first time that a foreign artist has topped the DVD chart four times consecutively with its DVD releases.
The “Tone” shows, which lasted on average around three hours, were jam-packed with dynamic performances and speeches given by the band in Japanese.

In July, the band’s 11th single “Android” also set a new record on Oricon.
The song rose to No. 1 on the Oricon daily singles chart and stayed there for a week. It sold a total of 152,000 copies, taking the duo’s combined record sales in Japan to exceed 3 million and earning TVXQ the title of being the foreign artist with the most records.
By Carla Sunwoo