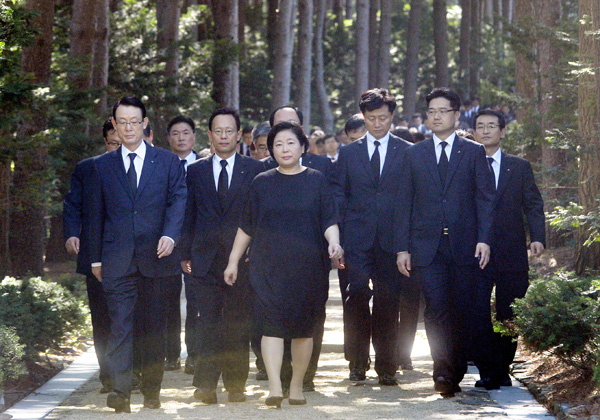 Hyundai Group Chairwoman Hyun Jeong-eun, center, walks with group executives after finishing their ninth memorial service for the late group Chairman Chung Mong-hun, in Hanam, Gyeonggi, yesterday. Chung, who was Hyun’s husband and a businessman who aggressively sought business with North Korea, committed suicide in 2003 amid an investigation that suspected him of creating secret funds and sending a large amount of money to North Korea. The group said about 10 Hyundai Asan officials, including its chief, Chang Kyung-chak, are scheduled to have another memorial service in Mount Kumgang in North Korea today. The conglomerate operated a cross-border travel program to the mountain since 1998, but it was suspended since 2008, when a South Korean tourist was shot dead by a North Korean solider during a trip. [NEWSIS]