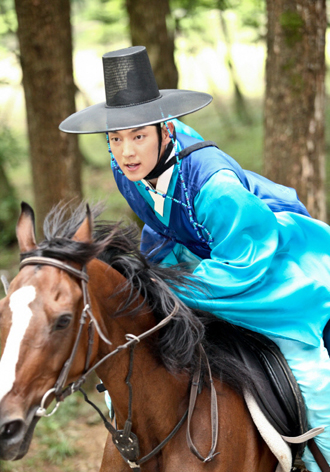 MBC’s “Arang and the Magistrate” unveiled teasers of its male lead Lee Jun-ki where the actor escaped a dangerous situation on horseback.

In the stills, Lee is said to shoot the horseback scene himself with no stunt double.

He also performed martial arts for a scene in the drama.

“Lee Jun-ki was good at martial arts,” said a representative of the show. “He is not only good at action scenes but also has been thoughtful of other colleagues.”

The 30-year-old actor, who was recently discharged from the Army, is making his screen comeback. Shin Min-ah and Yoo Seong-ho will also star in the TV series.

“Arang and the Magistrate,” set in the Joseon Dynasty, is a romantic fantasy drama based on the folklore of Arang, who died unjustly and returns as a ghost in order to reveal the circumstances surrounding her death.

The first episode of the drama will air Aug. 15 after “I Do, I Do” on Wednesday and Thursday.