As heat goes on, power situation getting volatile

As heat goes on, power situation getting volatile 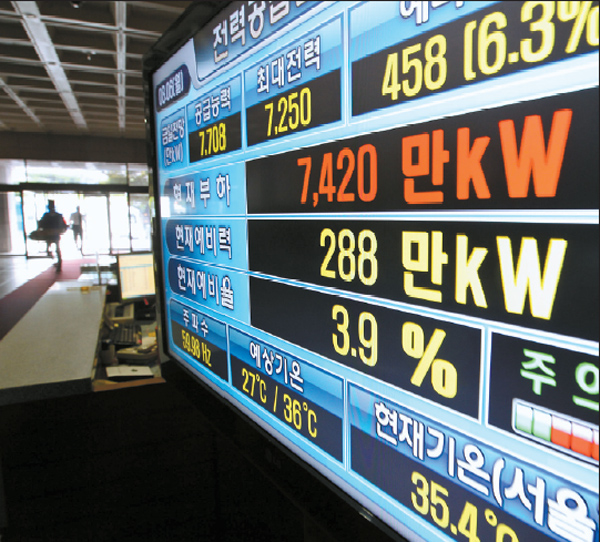 
Korea’s electricity reserves dipped to their lowest level yesterday since the massive blackout last Sept. 15 due to the unprecedented heat wave.

The Ministry of Knowledge Economy yesterday resumed operation of the Gori No. 1 nuclear plant, which hasn’t run since March, when the operator admitted it had covered up a power failure on Feb. 9.

The level of the electricity reserves went on a roller coaster ride yesterday, plummeting below the 3-million kilowatt level, which is considered dangerously low, twice: at 10:15 a.m. and 2:10 p.m., according to the Korea Electric Power Corporation.

In the morning, the government asked the media to ask the public to cut individual consumption, and it also requested that businesses halt some factory work, which saved around 1 million kilowatts. Kepco even cut electricity supply for one hour to 230 factories with which it has an agreement for cuts in case the reserves go below 3 million kilowatts. The reserve level recovered to over 5 million kilowatts at noon yesterday.

“Although it’s tight, we’ll be able to secure more than 4 million kilowatts of electricity reserve,” said Minister of Knowledge Economy Hong Suk-woo in a press briefing yesterday. “But if the heat wave continues, the reserves can temporarily fall to a critical level again. Individual efforts to cut energy consumption are crucial.” 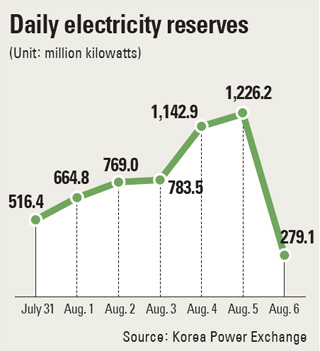 Companies also voluntarily participated in cutting energy consumption. Samsung Heavy Industries operated its own emergency electricity generator to supply 4 percent of its power demand yesterday. Doosan Heavy Industries also delayed operation of a factory in Changwon, South Gyeongsang, until after 5 p.m. Posco also posted tips to save energy on its company bulletin board.

The government had expected that the yearly vacation period for many factories would reduce demand enough to cope with the heat, but it didn’t.

“The Olympic Games being broadcast live keep the electricity demand high throughout the night as well,” Hong said.

A nationwide alert for voluntary energy cuts will be issued when the reserves go below 2 million kilowatts and power will be cut temporarily when the figure drops under 1 million kilowatts, according to the government.

The ministry’s decision to restart the Gori No. 1 plant came more than a month after the International Atomic Energy Agency, after an eight-day inspection of the plant, concluded that its condition had improved.

On Feb. 9, outside electricity needed to keep the reactor cool was cut off by mistake during a routine safety check. The reactor went powerless for more than 10 minutes, which led to temporary shutdown of vital functions, including the cooling of spent fuel. A diesel emergency power generator failed. The operator tried to conceal the blackout for more than a month.

The government denied the resumption was decided in haste due to the electricity supply needs.

“We waited until the residents near the plant agreed,” said Hong. “If we were to resume the operation in a hasty manner, we would have done it a month earlier.”