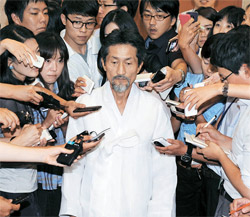 Disgruntled by longtime factionalism and the botched vote to oust two lawmakers, some minority members of the opposition Unified Progressive Party have decided to form a new party.

“In order to restore the liberal politics, there’s only one solution, which is creating a new liberal political party that meets public expectations,” said UPP Chairman Kang Ki-kab. “We can’t regain the support and trust of the people by revising internal policies.”

Lee and Kim have refused to forfeit the seats they won in the March proportional primary that turned out to have been rigged. The incident drew nationwide condemnation of the lawmakers and largest faction, which continues to back them.

Speculation is high that the Korean Confederation of Trade Unions, the nation’s largest umbrella union, will end its support of the UPP. Half of the UPP’s dues-paying members reportedly are associated with the confederation.

The confederation said in May that all of the 14 proportional candidates who won in the allegedly rigged primary should step down. Lee and Kim are the only ones who have not done so.

Still, Kang and other leaders have not decided whether to defect from the UPP immediately or dissolve the party first and then form a new one.

Among the UPP’s 13 proportional lawmakers, five are from smaller factions. If they leave the party, they would lose their posts.

The public approval rating for the UPP has dropped to 2.8 percent, which was down 1.5 percentage points from the previous week, according to Seoul-based pollster Realmeter. It is the lowest rating since the UPP was created in December.