Riverside a haven for the heat-stricken

Riverside a haven for the heat-stricken 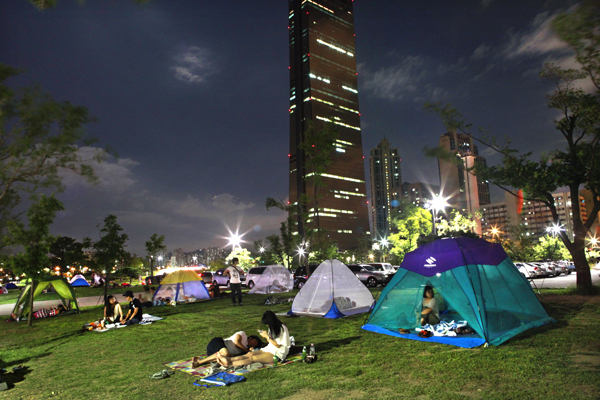 Seoulites enjoy a cool breeze blowing from the Han River at a riverside park in Yeouido, western Seoul, on Friday night. The capital has had a record nine so-called “tropical nights” in a row as of Sunday. By Park Sang-moon

With Seoul experiencing the hottest day since 1994 yesterday, Seoulites found one more reason to visit the Han River parks other than jogging and riding bikes: The riverside parks are providing a nighttime respite from the heat.

“It’s my fourth time coming here to the Yeouido Hangang Park this year to spend a night,” Kim Sang-hyun, 39, said as he was setting up a tent with his wife on late Thursday. “We go to work from here the next day.”

“Even though the city is under a series of tropical nights, the park is an exception, thanks to a refreshing breeze blowing all the time,” said the chemical engineer, who first started camping by the riverside last year.

“I get up at around 6 a.m. to go home and take a shower before work,” Kim said. “I have no problem being on time for work.

“I see more people bringing tents here this year than last year,” the resident of Sillim-dong, southern Seoul, said. “It probably has to do with the increasing popularity of camping among newlyweds.”

Yoon Dae-sung, an office worker, was watching an Olympic game on his smartphone, lying on his belly in a tent with his wife.

“We have come here every day this week as I am on work vacation, bringing a tent to sleep,” said Yoon. “But even during working days, I sleep here in a tent and get up around 3:30 a.m. to go home first to shower before work.

“I do feel a little tired from spending a night here, but it’s much better than being exposed to either nighttime heat or air conditioning all the time at home.”

There are 12 Han River parks. The one in Yeouido offers a stark contrast in landscape, with refreshing breezes from the river directly next to high-rise buildings.

The buildings and streets in Yeouido are known to cause a so-called urban heat island effect which causes higher temperatures than in rural areas. The difference in temperature is particularly dramatic at night.

“Buildings are pumping out heat just across the street in Yeouido. But as you walk over the crosswalk, you can feel the air get cooler as you enter into a whole new world,” Song Mi-jung, 39, who came with her three sons, told the Korea JoongAng Daily while sitting on a mat eating fruit.

“People look worn out everywhere these days because of sweltering days and tropical nights. The air of festivity and freedom here is pleasant just to watch.”

Even as the clock goes well past midnight, many stay at the park filled with lights from the bridges and buildings from the northern part of the city.

“Personally, I also think this is one of the best nighttime views in the city,” said a 24-year-old student who wished to be identified only by his surnamed Kim. “For someone like me, who loves chatting with friends with some fried chicken and beer, this park is a heaven away from the heat wave. No time limits, no crowds.”

Soaring temperatures in the city have led to the both plunge and rise in sales for convenience stores at the river, depending on the time of the day.

“During the day time, I hardly see customers, who would want to come here with the mercury going over 35 degrees Celsius?” asked Park Myung-dan, a convenience store owner.

“But sales go up by around 30 to 40 percent during the night as people who come here to escape from the heat buy cans of beer and snacks for their picnic,” said the owner.


*Lee Da-in and Kim Ye-jin contributed to this article.