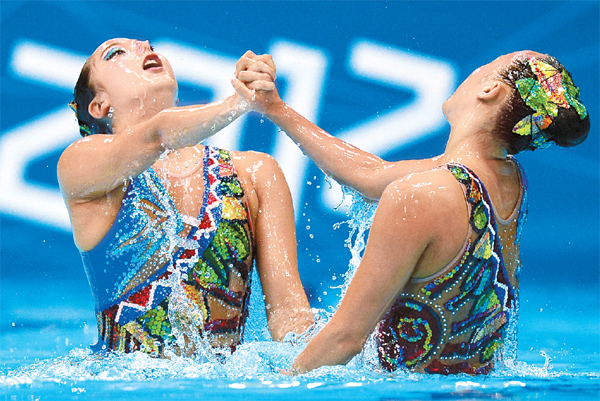 Park Hyun-sun and Park Hyun-ha compete in the duets free preliminary routine during the synchronized swimming competition at the London 2012 Olympic Games on Monday in London. [AFP/YONHAP]


While Yang Hak-seon stole the show on Day 11 of the London Olympics, he wasn’t the only one to add a medal for Team Korea.

Kim was 1.6 point behind Matthew Emmons of the United States until the final bullet. On the last shot, the 27-year-old Korean fired a 10.4, while Emmons scored a 7.6 to fall out of second place. Niccolo Campriani of Italy eased his way to the gold with 1,278.5 overall points.

Kim, who was shooting in his first Olympics, became the first Korean to win a medal in rifle shooting since Kang Cho-hyun did so at the 2000 Sydney Olympics. The shooter said that teammate Jin Jong-oh, who already won two gold medals at the London Olympics, gave good advice before coming to the Royal Artillery Barracks for the event.

“ [Jin] told me a lot of good things while staying at the Athletes’ Village,” Kim said. “I only thought about scoring a 10 and it helped me concentrate better at the end.”

In boxing, Han Soon-chul beat Fazliddin Gaibnazarov of Uzbekistan 16-13 in the men’s lightweight bout and reached the semifinals. There is no bronze-medal contest, so Han has clinched at least a bronze medal.

Han is scheduled to fight Evaldas Petrauskas of Lithuania on Saturday.

After scoring 87.460 points at the free routine preliminary yesterday to pile up a total score of 174.16, the Park sisters managed to clinch the final of 12 spots.

There was also disappointing news as 2004 gold medalist Jung Ji-hyun failed to medal in the men’s under-60-kilogram Greco-Roman wrestling. The 29-year-old lost to Hasan Aliyev of Azerbaijan 2-0 in set scores in the quarterfinals. Jung’s teammate Lee Se-yeol also lost to Amer Hrustanovic of Austria at the round of 32 in men’s under-84-kilogram.

The women’s field hockey team beat Belgium 3-1 in their Group A match, but failed to advance to the semifinals.