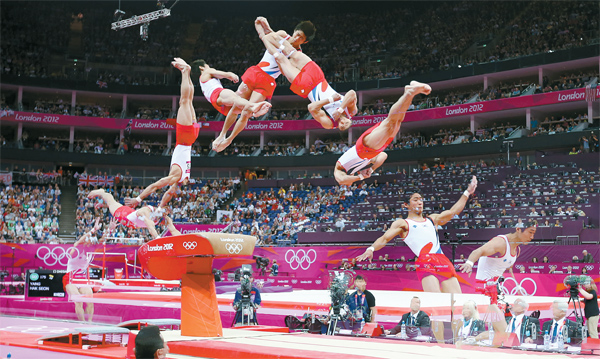 Yang Hak-seon performs his signature triple twist, so difficult it has been named by the International Gymnastics Federation after the vaulter himself, during the artistic gymnastics men’s apparatus finals at the 2012 Summer Olympics on Monday in London. He would go on to win Korea’s first-ever gymnastics gold medal in Olympic history. [YONHAP]


Yang Hak-seon’s first try, he performed his signature triple twist that is so difficult, it has been named by the International Gymnastics Federation after the vaulter himself. He couldn’t stick the landing, falling forward a couple steps for point deductions.

But the feat was so impressive that after he stuck his second try, a more manageable but still advanced triple twist known as the Tsukahara, Yang knew he had made history. He ran to his coaches, embracing them and smiling even before the score had been officially announced.

The 19-year-old would indeed go on to win Korea’s first-ever Olympic gold medal in gymnastics at the final held at North Greenwich Arena late Monday night Korea Standard Time. He received an average score of 16.533 from the two vault attempts.

Despite his young age, Yang, the reigning world champion, had entered the competition under heavy pressure to win Korea’s first gymnastics gold. Korea has competed in both the men’s and women’s gymnastics events since the 1960 Olympics in Rome, but had settled for four silver medals and four bronze medals, all in men’s events.

Yang managed to pull off his signature move, which earned him the highest points among the eight finalists, a 16.466, despite the shaky landing. The technique is eligible for a 7.400 difficulty score, which is 0.4 higher than many other triple-twist jumps. The gymnastics scoring combines the difficulty and execution scores.

The Tsukahara is eligible for a 7.000 difficulty score, and went smoothly from start to finish with a perfect landing, earning him a 16.600.

“I can’t believe that I have done it. I feel numb,” Yang said after the final. “I felt sorry when my senior gymnasts ended up being runners-up when there were good chances, and I was also worried that I could be like that, but fortunately I could get a gold medal.

“I want to thank to my seniors,” he said, referring to older Korean gymnasts who trail-blazed the path for the young gymnast.

Yang’s gold medal is Korea’s fourth medal in the vault. Park Jong-hoon, the winner of Korea’s first Olympic medal in gymnastics, won a bronze medal in vault at the 1988 Seoul Olympics.

Four years later, Yoo Ok-ryul won another bronze in the vault at the Barcelona Olympics. Yeo Hong-chul, another vault gymnast, entered the 1996 Atlanta Olympics as Korea’s strong favorite for a gold medal, but he received a silver medal due to a botched landing.

In other previous men’s gymnastic events, Yang Tae-young came closest to winning a gold medal in the men’s all-around event at the 2004 Athens Olympics. He had a perfect performance in the parallel bars, but a gold medal was awarded to Paul Hamm of the U.S. after the judges made a scoring error and gave Yang a score of 9.9 instead of 10.0.

Korea’s appeal was turned down and Yang settled for a bronze medal. His teammate, Kim Dae-eun, won a silver medal in the same event in Athens.

In an interview with the Korea JoongAng Daily before the London Olympics, Yang Hak-seon said he wanted to win a gold medal to raise the credentials of the sport, which remains unpopular in Korea, in a fashion similar to Kim Yu-na and Park Tae-hwan.

He reiterated the wish after winning the gold.

“Gymnastics is not a very popular sport in Korea, but I want to inspire a new generation,” Yang was quoted as saying by The Associated Press. “I hope younger people will look at me and have a bit more confidence to go into gymnastics.”