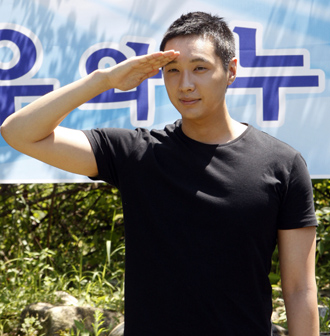 Actor Ji Hyun-woo signed up for military service yesterday in Chuncheon, Gangwon. After spending four weeks at the training facility, the 27-year-old actor will undertake 21 months of mandatory military service in the Army.

He was supposed to enter July 3, but had to postpone the date due to medical treatment. Ji was hurt while shooting scenes on horseback for the drama “Queen In-hyun’s Man.”

The actor publicly declared that he had fallen in love with co-star Yoo In-na, saying, “I wanted to say this in front of all the fans of the drama. I love Yoo In-na” at a press conference to mark the drama’s end.

The two celebrities have been officially dating, and Yoo In-na said in June on her radio show that she also has feelings for Ji.

“The two enjoyed a date a day before his enlistment. Yoo decided not to go to the military base because a lot of fans will bid Ji farewell,” said a representative of Ji’s agency.