Korea, Japan to battle for bronze

Korea, Japan to battle for bronze 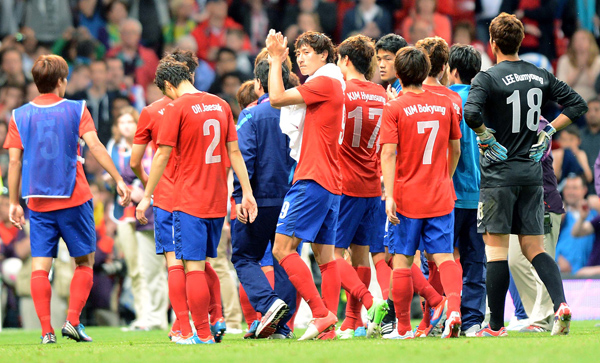 Members of the Korean Olympic football team walk off the pitch at Old Trafford early yesterday morning KST after a 3-0 defeat by Brazil at the semifinal match. Korea will play Japan in the bronze-medal match early Saturday morning. [NEWSIS]


The young Taegeuk Warriors suffered a crushing 3-0 defeat against Brazil in yesterday’s semifinal Olympic football match, ending hopes of a first-ever gold medal in the sport and pitting Korea against archrival Japan in the bronze-medal match.

After several controversial judging decisions in favor of the five-time world champions, Korea came up flat against Brazil and failed to convert opportunities. But the public has quickly shifted its focus to the remaining bronze-medal decider against Japan, which lost 3-1 to Mexico in the other semifinal match.

Once again, Korea will find itself on a politically charged football pitch against its former colonial aggressor, this time with much more than a rivalry at stake.

Returning home with Korea’s first-ever Olympic medal in football has been a mission for the Hong Myung-bo squad from the beginning of the tournament. A bronze medal will also earn players, many of whom have promising careers in European leagues, legal exemption from Korea’s compulsory 21-month military service.

“It is true that we feel pressure because it is a rivalry match to win and military exemption is at stake as well,” said Ki Sung-yueng of the Scottish Premier League club Celtic. “We need to get stronger mentally.”

The bronze-medal match will be held at the Millennium Stadium in Cardiff City, Wales, at 3:45 a.m. Saturday Korea Standard Time.

“Without any words, we know how important this game is,” said Korean captain Koo Ja-cheol of FC Augsburg. “Sometimes we beat Japan, sometimes we lose, but what’s for sure is that we will enter the game with a totally different mind-set.”

Although Korea has dominated the rivalry with Japan in regular international matches - 40 victories, 13 losses and 22 draws - the two countries are neck and neck in the Olympic showdowns. The U-23 teams are dead even at four victories, four losses and four draws against each other on the Olympic stage.

Korea opened the Olympic rivalry with a 1-0 victory in the qualifications for the 1992 Barcelona Olympics. But, Korea hasn’t beaten Japan since September 2003, losing twice and drawing three times. The latest loss came in December 2009, when the Korean team managed by Coach Hong let its lead slip and lost 2-1 in a match held in Changwon, South Gyeongsang.

Japan will also be fired up for the match. The Takashi Sekizuka squad, which won Group D, is a formidable opponent. It beat Spain, the pre-tournament favorite, 1-0 in the group competition and blanked Egypt 3-0 in the quarterfinals.

Japan was also vying for a double gold with its women’s football team set to play the United States in the gold medal match on Friday.

“Although we did not advance to the finals, we have a next match and will win it no matter what,” Sekizuka was quoted as saying by Korean media outlets.

Japan is especially strong in defense. It didn’t allow a single goal through the quarterfinals. Yuki Otsu and Kensuke Nagai are two lethal strikers who will challenge Korea’s back line. They have combined for five of Japan’s six goals in London.

Coach Hong said the key to the preparations for the Japan match will be to recuperate the setbacks in the players’ physical strength.

The Korean team has traveled for each of the five games so far, from New Castle to Coventry to London to Cardiff to Manchester. Last night, players were scheduled to travel back to Cardiff, where Korea beat Great Britain in the penalty shoot-out at the semifinal, for the Saturday match. Two training sessions, in the morning and in afternoon, are scheduled for Thursday local time.

“We will get ourselves well-prepared for the third-place decider and do our best to surely win a bronze medal,” Hong said.

In the Brazil match held at Old Trafford, Korea came out strong in the beginning, creating several goal-scoring chances, including Ji Dong-won’s header in front of the goal in the 13th minute, which defender Juan Jesus blocked, almost kicking Ji’s head.

Ji tumbled onto the ground, with paramedics rushing onto the scene, but the referee did not call for a penalty.