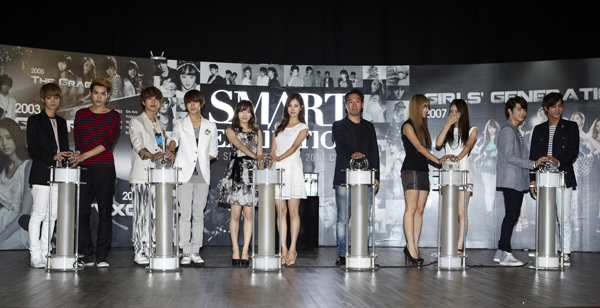 SM Entertainment artists and CEO Kim Young-min (fifth from left) push a button to light up the Fantasy Tree, the centerpiece of the “The S.M.ART Exhibition” at COEX, Samseong-dong, southern Seoul, yesterday. Provided by the company


SM Entertainment, Korea’s leading entertainment agency, announced yesterday that it has kicked off a special exhibition featuring its hottest stars such as Girls’ Generation and Super Junior as well as the latest technology innovations by global companies like Samsung Electronics and Canon.

The exhibition, dubbed “S.M.ART exhibition,” is being held for at COEX, Samseong-dong, southern Seoul. The entertainment empire apparently is pinning high hopes on the event: it has spent some 5.6 billion won ($4.9 million) for the exhibition and expects some 50,000 people will visit during its ten-day run.

“The exhibition is meaningful in two aspects,” SM Entertainment CEO Kim Young-min told reporters yesterday at a press event. “One is that this is a rare event where our entertainment content takes the center stage and companies’ latest technologies and services are built around it to offer hands-on experience to people.”

Kim explains that he got the idea for the exhibition as he traveled the world and visited global IT fairs like the Consumer Electronics Show in Las Vegas where companies like Samsung Electronics and Sony would display their products using scenes from films like Spider Man and SM artists’ music videos.

So he thought to himself, why not take that a step further and enrich the content?

“Secondly, this exhibition is planned and created in Korea, but this will be exported to overseas,” Kim noted. After the run in Korea, the exhibition will be taken to Taiwan early next year, and then to Japan, mainland China, U.S. and Europe. Kim, who grew up in Japan, joined SM Entertainment in 1999 as a team leader of overseas business.

From left: Tae-yeon, Yoo-na and Hyo-yeon of Girls’ Generation work on a high-tech puzzle; SHINee poses in front of the Panorama 3-D Theater


The exhibition consists of 20 spaces and notable ones include the so-called Fantasy Tree, which is a 13-meter high cylinder-shaped screen at the center of the exhibition hall. Members of popular SM groups like Girls’ Generation, Super Junior and f(x) were seen posing and walking and smiling on it. Samsung Electronics, Korea’s leading consumer electronics giant, has installed some 50 large-sized LED TVs around it.

Near it, Hyundai Motor has displayed its i30 hatchback and luxury van for celebrities. And with those vehicles as the backdrop, media art show was underway.

At a section called S.M.Motion with Canon, 70 of Canon’s EOS 5D Mark II cameras have shot Girls’ Generation and Super Junior using their special effects used in the films like Matrix. “Among other sections, I’d like to recommend the S.M.Motion with Canon section,” Soo-young, from Girls’ Generation, said. “Our music video of ‘Genie’ can be seen there with special effects.”

There are also spaces where visitors can meet their favorite stars through 3-D and hologram technologies as well as high-tech home theater of Bose, augmented reality service of KT.

SM Entertainment, founded by singer-turned-producer Lee Soo-man in 1995, was perhaps a pioneer in hallyu (Korean Wave), or the popularity of Korean pop culture overseas, with its early bands like H.O.T. and S.E.S. and Shinhwa. Today, it manages some 66 stars in areas of music, dramas, films and musical.


CEO Kim added with the exhibition, SM Entertainment will continue to its works on music, drama, and performing arts businesses while venturing into new field of exhibition business.

Tickets to the exhibition cost either 25,000 or 85,000. The latter one comes with gifts like SM artists’ posters, postcards and notepads, as well as a five-percent discount at the gift shop. For more information on tickets, contact Auction at 1566-1369 or visit http://ticket.auction.co.kr. To find out more about SM visit the website at www.smtown.com.