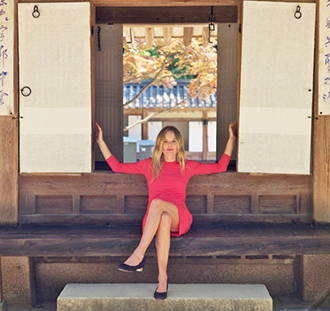 “On our first day in Seoul, my fiance Michael Polish and I ventured out to discover Changdeokgung Palace,” she wrote on Vogue.com. The couple is believed to have visited Seoul sometime in May.

This is the first time she publicly referred to her partner as her fiance, making her engagement to Polish official. She has been notoriously quiet about her personal life since her high-profile relationship with Orlando Bloom.

In the travel piece, she posted pictures taken at Korea’s major landmarks, including Bukchon Hanok Village and Seoul Station as well as the royal palace.

She wrote that she felt as though she were “magically being transported to a different world” when entering Changdeok Palace.

“What is interesting about Seoul is the juxtaposition of modern-day skyscrapers towering over ancient preserved buildings,” the actress wrote.