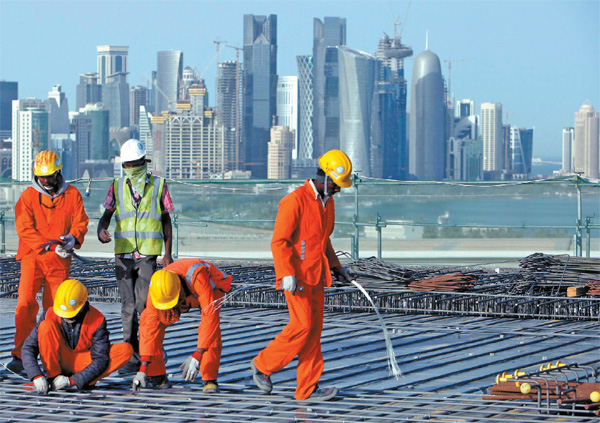 Construction workers from Hyundai E&C are shown building part of Hamad Medical City in Doha, Qatar, which is scheduled to be completed in December 2013. Overseas construction orders won by Korean companies have shot up. [JoongAng Ilbo]


Hanwha E&C has been rushing to recruit people to work in Iraq after it won a mammoth-size project worth $7.25 billion in May.

The company’s largest-ever overseas contract, which includes 100,000 households as well as related infrastructure including roads and sewage systems, requires that 1,500 employees be sent from Korea.

The construction company, which has already sent 50 staff to the turbulent Arab country, plans to hire 200 people ranging from new recruits to seasoned veterans by the end of this month.

“We’re already preparing for construction to go full-steam ahead by the end of this month,” said Lee Dae-woo, head of Hanwha E&C’s management support department.

“Our 100 or so business partners are planning to send some 1,000 employees to Iraq for the project.”

Korea’s construction industry, which has been struggling with a sluggish domestic real estate market for over a year, has been enjoying solid growth recently as orders flood in from the Middle East.

As a result, builders are competing fiercely to find talented new hires for overseas postings.

The situation is similar to that seen in the 1970s, when Korean companies looked to the Middle East to find new revenue streams in their bid to expand.

In the 1980s, construction companies’ orders from the region accounted for almost 90 percent of their total overseas orders. This sparked a short-lived growing frenzy that tapered off in the following decade, when geopolitical tensions saw orders drop by roughly 30 percent.

The recent upswing comes as Middle Eastern countries bask in the golden glow of their oil profits as the price of crude has skyrocketed, leading to an upsurge in investments in roads, petrochemical and power plants, and other areas of interest.

According to the International Contractors Association of Korea, local companies won overseas construction orders worth $32.5 billion won this year.

Of that total, 62 percent or $20.2 billion came from the Middle East, with the region accounting for seven out of every 10 major construction contracts picked up outside Korea.

In June, Samsung Engineering clinched a key deal to build a chemical plant worth nearly $2.5 billion in the United Arab Emirates, while GS E&C signed up to build a petrochemical complex in Saudi Arabia worth $1.8 billion that same month.

As a result, the number of people sent to the region has been gradually increasing. As of the end of last year, Korean construction firms were working on at least 1,800 projects in 107 countries, with a total of 170,000 workers placed on-site. Of these, 18,000 were Korean.

In a survey of 110 firms conducted by the contractors association in February, local builders plan to send an additional 2,200 Koreans overseas this year. An extra 14,000 will be sent by 2015, with more than 60 percent of these destined for the Middle East, the survey found.

As companies vie to secure skilled workers, the value of top-tier engineers has shot up. Hyundai E&C, the nation’s top builder, hired 240 new recruits last month and has already sent 150 to foreign shores, including about 70 of those with experience in the industry.

Daelim Industries hired 290 people, of which 69 percent, or 200, were earmarked for overseas jobs. Daewoo E&C hired 130 people, with a share due to be sent abroad, and Samsung C&T recruited 1,100 in the last two years who are capable of working at plants and building sites outside the country.