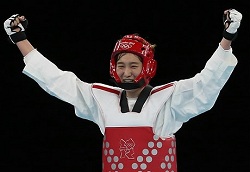 Hwang had vowed to win gold in London after managing only a bronze at the world championships in Korea last year, and the 26-year-old enjoyed a comfortable 12-5 win over European champion Tatar to deliver South Korea's 13th gold medal of the Games.

That tally ties the overall record medal haul Korea set in Beijing four years ago, and with Cha Dong-min and Lee In-jong set to compete in the heavyweight categories on Saturday they could soon surpass that mark.

Hwang was in tears after her victory and said she was so proud to have won another gold in the Korean martial art.