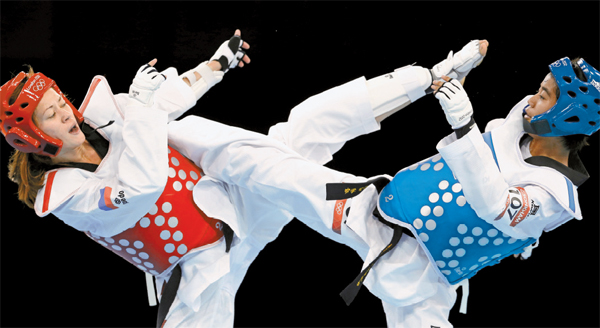 LONDON - Cheers resounded through the ExCeL South Arena on Thursday Korea Standard Time as the four-day taekwondo competition kicked off.

Spectators in the jam-packed arena followed every move of the athletes, stomping and clapping as they rooted for their home countries.

Tom Gale, 19, from Great Britain, told the JoongAng Ilbo that he liked watching the mercurial, unpredictable matches. He said watching taekwondo made him want to learn it at a local taekwondo club.

Yet Korea, the inventor of the ancient combat martial art, entered the London Olympics hoping to win a larger battle.

Since it was introduced at the 2000 Athens Olympics, taekwondo has brought Korea nine Olympic gold medals, but mounting criticism over its lack of fan interest and fairness has cast a shadow over its longevity on the Olympic stage.

The International Olympic Committee recently announced that it will exclude one of the 26 Olympic events at a general assembly in Buenos Aires in September next year, and it is rumored that taekwondo is one of the events under consideration. If taekwondo is voted out, the 2016 Olympics in Rio de Janeiro will be its last.

“In the taekwondo competition at the London Olympics, whether or not Korea wins a gold medal is not that important,” Choue Chung-won, the president of the WTF, told a media conference in Seoul last month. “The most important thing is to increase fairness and interest.”

To prevent the embarrassment of the sport being removed from the Olympics, the Seoul-based world governing body has revamped the scoring and judging rules.

“In order to earn bigger points, the athletes will engage themselves in a fierce battle, and that will make the bouts livelier,” said Jeong Gwang-chae, a professor at Korea National Sports University.

Some local sports fans said that the changed rules are making a difference. When China’s Wu Jingyu defeated Spain’s Brigitte Yague Enrique in the women’s 49-kilogram final on Thursday after relentless kicks to the body and head, one Korean Internet user rated the match highly, calling it a real taekwondo bout.

A 10-second rule was also introduced to make the sport more interesting. Under the rule, an athlete will receive a warning if he or she does not make an attack attempt in 10 seconds. The arena has also been downsized to eight meters by eight meters (26.25 feet), from 10 meters by 10 meters, to encourage more action. Fairness among the officials was another problem. At the Beijing Olympics four years ago, a Cuban athlete kicked a Swedish referee in the face after the referee disqualified him in the bronze-medal match.

To reduce the room for arbitrary decisions by the judges, the WTF has introduced an instant replay system, allowing the coaching staff of the athletes to request a replay when they disagree with a judging decision. Six cameras have been installed in the arena.

The video replay worked for Oscar Munoz of Colombia when he faced Thailand’s Pen-Ek Karaket for the bronze medal in the men’s 58-kilogram category Thursday. Karaket earned points with kicks to the head to come from behind to win 7-6, but Munoz’s coach immediately requested a replay. The video showed that the Thai player’s foot did not touch the opponent, and Munoz regained a 6-4 lead and then won the bronze. The newly introduced electronic scoring system, using electronic sensors installed in the headgear and body gear, has also added accuracy to the scoring.

Not every sports fan, however, is buying into the efforts. After Korea’s Lee Dae-hoon lost to Joel Gonzalez Bonilla of Spain 17-8 in the men’s 58-kilogram final on Thursday, some local fans said the games are not as fun as they should be. “If it wasn’t a sport where Korea had a good shot at winning a medal, it would not be an interesting sport to watch at the Olympics,” said a Korean fan on Twitter.