End of an era for Korea after taekwondo slipup

End of an era for Korea after taekwondo slipup 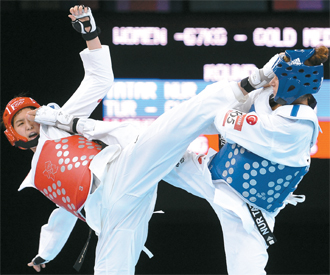 Hwang Kyung-seon, left, takes on Turkey’s Nur Tatar during their gold-medal match in the women’s under-67-kilogram taekwondo competition at the Summer Olympics in London on Saturday (KST). Hwang beat Tatar to claim Korea’s only gold medal in the sport at the recently ended Games. [Joint Press Corps]

Taekwondo was considered as traditional gold mine for Korea at the Olympics, but at least in London, this was not the case.

Korea, the birthplace of taekwondo, finished the London Olympics with a gold and a silver medal in the sport, its worst finish since the kicking martial art joined the Olympic roster in Sydney in 2000.

Prior to the London Games, which wrapped up in the early hours today (Korea Standard Time) with a rousing Closing Ceremony, Korea had consistently trumped all other nations in the gold-medal count at the sport.

In Sydney, it claimed three gold and one silver, followed by two gold and two bronze at Athens 2004 and four gold - the maximum any one country can grab - in Beijing four years ago.

But luck was not on its athletes’ side in the British capital. On the first day of competition last Thursday, Lee Dae-hoon finished second in the men’s under-58 kilogram class after the 20-year-old was beaten 17-8 by Joel Gonzalez Bonilla of Spain. On Saturday, Hwang Kyung-seon turned the tide by winning the women’s under-67-kilogram title by defeating Nur Tatar of Turkey 12-5. The 26-year-old, who successfully defended her Olympic title, became the first female taekwondo athlete to medal at three straight Olympics after also claiming a bronze in 2004.

Hwang’s gold was Korea’s 13th overall in London, tying the record it set in Beijing. Cha Dong-min, the defending champion in the men’s over-80-kilogram division, failed to set a new gold haul for the country when he was eliminated from the quarterfinals by Turkey’s Bahri Tanrikulu, and fans’ hopes were dashed for a second time when Lee In-jong lost her repechage bronze-medal bout Anastasia Baryshnikova of Russia in the women’s over-67-kilogram class.

Under Olympic rules, any fighter who loses in the quarterfinals to an eventual finalist gets another shot at bronze under the so-called repechage format. This saw Lee automatically advance to face Natalya Mamatova of Uzbekistan, who she trounced to square up against Baryshnikova for one of two bronze medals on offer.

Local taekwondo pundits say the adoption of electronic body protectors at the latest Games has changed the playing field and allowed more countries to come up with better fighting strategies. Since the device was introduced to the sport in 2009, many players started to focus more on delivering accurate kicks and punches to the pads.

Korea’s women’s team surrendered its top spot to China at the 2009 World Championships in Copenhagen, while at the 2010 Asian Games, Iran’s men and China’s women won more gold.

In Gyeongju last year, Korea’s men failed to win the most gold at the biannual World Championships after Iran outperformed the host nation. Korea’s men topped the gold table for the previous 19 straight editions of the worlds.

Korea head coach Kim Se-hyuk said the era of one country dominating the sport has come to an end.

“Athletes in other sports such as judo, wrestling, archery had four years to prepare, but we only had three to five months,” Kim said. “We need more [financial] support and attention.”