Legendary diva Patti Kim is ready step on the stage one last time for an upcoming show that incorporates several concerts as part of JTBC’s “Patti Kim’s Goodbye Concert,” which will air for 16 weeks starting at the end of September.

Kim is currently on a farewell tour, but the show that is to begin next month is a celebration not only of the 74-year-old Kim’s retirement, but also her entire career and the way in which she and other public figures have influenced Korean culture, economy, society and sports over the past 50 years.

Kim made her stage debut in 1958 at a U.S. military base in Korea. With her singing voice and audience appeal, Kim has been able to maintain her star status through 54 years of her country’s sorrows and triumphs. If the musical genre of trot (traditional Korean pop) was dominated by singer Lee Mi-ja, the musical arena of standard pop-ballad belonged to Patti Kim. “Early Rain,” “Farewell,” “Light and Shadow” and “Love that Left Autumn Behind” have become enduring favorites. In 1989, Kim became the first Korean singer to perform at Carnegie Hall in New York, one of the world’s renowned concert venues.

For the upcoming show, Kim’s beloved junior singers will join her onstage and together perform each others’ hits. In each episode, a well-known public figure who played a role in shaping Korean society - whether an Olympic hero, influential politician or business leader - will share his or her story.

Moreover, the show is thought to be a resurrection of “The Patti Kim Show,” aired in 1966. At that time, TBC (former body of broadcasting company JTBC) had for the first time created a daily show where a singer performed live for 30 minutes. Though it was unconventional for its time, Kim’s appearance was a great success and the program continued to show similar programs such as “The Lee Mi-ja Show” and “The Yoon Bok-hee Show.” Following this program, many shows attempted to create analogous versions but were only able to televise one or two live shows. Consequently, they failed to replicate the success of “The Patti Kim Show.” That same year, Kim appeared in TBC’s “Patti Kim’s Travels,” thus becoming a regular performer for the broadcasting station. 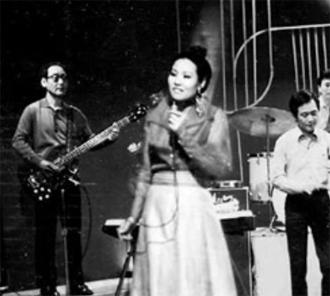 “Patti Kim’s Goodbye Concert” will be held at Hoam Art Hall, central Seoul. “Through this show, I want to meet those I have been longing to encounter but did not yet have a chance to,” says Kim. With her contributions in producing the show and inviting the other singers, Kim is doing everything she can to make it worthwhile.

“Personally, I will always remember ‘The Patti Kim Show.’ It was a one of a kind program that was unprecedented. The concert is my way of giving back all the love I received during my career, and I am all the more emotional for doing it through JTBC,” she says.

JTBC’s head of content, Joo Chul-hwan, says, “Patti Kim’s farewell concert is indeed being planned, and we will do so in a way that the nation can reflect on how it has acquired its vivid modern history in the company of legendary diva Patti Kim. It is also meant to once more show the past splendor of TBC.”