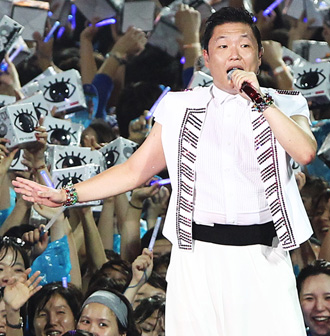 Psy has been on fire this month, with his hit “Gangnam Style” making international headlines. But at his latest concert, which set out to be a water-filled party, his heat streak became a bit too literal.

According to his agency YG Entertainment, the concert, held at a sports stadium in Jamsil, southeastern Seoul, was interrupted when part of the stage caught on fire due to sparks from the fireworks that were part of the performance.

The fire was put out in about 10 minutes as the staff had a lot of water readily available for the concert. The performance, titled “The Heumppeok Show,” had staff members spray water on the audience during Psy’s performance. Heumppeok means “heavily drenched” in Korean.

“How hot were we that it really caught on fire!” Psy, 35, quipped to calm down the audience after the breakout.

The rapper is widely known for his wacky songs and dances. Around 30,000 people attended Saturday’s concert.