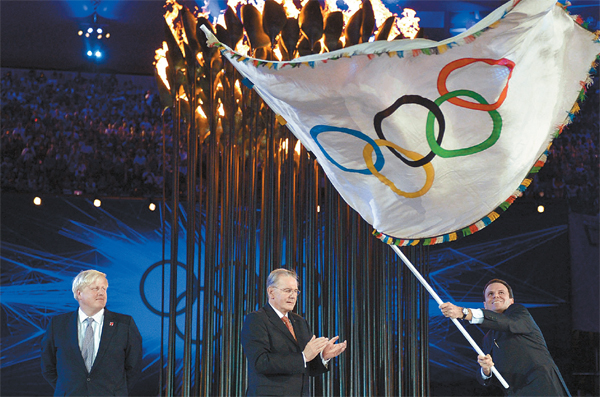 
After 16 days of sport extravaganza, the London Olympics bid farewell to the world yesterday, Korea Standard Time, with a closing ceremony titled “A Symphony of British Music.”

From Queen to the Spice Girls, a giant sing-along closed the 30th Summer Games, with the next Olympiad scheduled for 2016 in Rio de Janeiro.

“Through your commitment to fair play, your respect for opponents and your grace in defeat as well as in victory, you have earned the right to be called Olympians,” International Olympic Committee President Jacque Rogge told athletes from 205 nations at the ceremony. “These were happy and glorious Games.”

The United States was the leading medal winner with 104 (46 gold, 29 silver, 29 bronze) followed by China with 87 medals (38 gold, 27 silver and 22 bronze). Great Britain finished a surprising third, finishing ahead of Russia. The host nation won 29 gold medals, 17 silver and 19 bronze; Russia had 24 golds.

There were 302 medals up for grabs, and 85 nations won at least one in London. Grenada had its first gold medalist ever, while six other nations - Bahrain, Botswana, Cyprus, Gabon, Guatemala and Montenegro - sent athletes to the Olympic podium for the first time.

The London Olympics produced 44 world records and 117 Olympic records. Among the world marks, 11 were in weight lifting, 10 in cycling, nine in swimming, eight in shooting, four in athletics and two in archery, both set by Koreans.

Beyond the medal counts, there were some extraordinary individual performances.

Jamaican sprinter Usain Bolt was the stuff of legend as he won the 100 and 200 meters, and anchored a world-record performance in the 4x100 relay.

In the pool, Michael Phelps wrapped up his phenomenal career with four gold medals and two silvers to become most successful Olympian in the history of the Games, with a total of 22 medals, 18 of them gold, breaking the previous career record of 18 total medals held by 77-year-old Soviet gymnast Larisa Latynina.

Korea’s performance was particularly significant since the country’s first Summer Olympics under its own flag was at the 1948 London Games, and Korea proved it is a consistent top 10 powerhouse in international sport.

Korea’s initial goal was collecting at least 10 gold medals and finishing in the top 10 in the medal standings. Korea ended up in fifth place with 13 golds, eight silvers and seven bronze medals. In the medal standings, it was Korea’s second-best result after a fourth-place finish at the 1988 Seoul Olympics. Its 13 gold medals equals its performance in Beijing, where Korea finished seventh.

Boxer Han Soon-chul in the men’s lightweight division could have added the nation’s 14th gold medal on the last day and set a new national record, but he had to settle for silver against Ukraine’s Vasyl Lomachenko.

And there was plenty of drama for Team Korea with controversial referee decisions in fencing, swimming and judo, but Lee Kee-heung, chief of the Korean delegation, said athletes competed hard to the end and made their forefathers who participated in the 1948 Olympics proud.

“We’re honored to have exceeded our goal and given great pleasure to people back home,” Lee said.

Fencing turned out to be the biggest contributor to Korea’s medal tally. The sport that collected only three medals prior to London amassed total of six medals - two golds, one silver and three bronze medals.

Shooters delivered three golds and two silvers, while archery, a traditional gold mine, didn’t disappoint Korean fans as it accounted for three gold medals and one bronze medal. The women’s archery team, in fact, won its seventh consecutive gold medal.

For all the success, there were some disappointments.

Taekwondo, which some thought could yield four gold medals, finished with a gold and silver, while weight lifters, who won two golds and one silver at the 2008 Beijing Olympics, came home empty-handed.

Badminton won only a bronze medal after two Korean women’s pairs were disqualified for trying to throw the game to get a better draw in the knockout round.

Stars were born once again, but the spotlight didn’t only go to those who collected a gold.

While vaulter Yang Hak-seon brought Korea its first gymnastics gold and shooter Jin Jong-oh and archer Ki Bo-bae each won two gold medals, others who failed to medal earned the respect of peers and fans alike.

Woman weight lifter Jang Mi-ran, the defending champion, finished fourth in her class but touched hearts. In what could be her last Olympics, she knelt and prayed before kissing the barbell and bowing to fans, giving thanks for the support that she had received.

Rhythmic gymnast Son Yeon-jae also stole the spotlight after becoming the first Korean to reach the individual all-around final, and synchronized swimmers Park Hyun-sun and Park Hyun-ha also achieved the same feat as they were the first women to reach the final in women’s duet in 12 years.

The women’s handball and volleyball teams all failed to collect a medal, losing in the bronze medal contests.