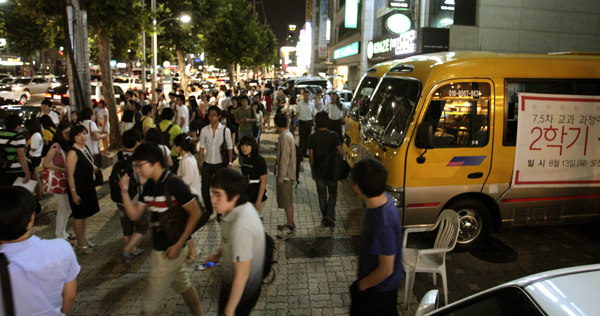 
Korean parents’ obsession with private education and sending their offspring to prestigious universities led foreign funds to splurge on top-end cram schools after they witnessed shares of one of these, Mega Study, jump 10-fold within two years of listing on the Kosdaq in 2004.

Hoping to be the next beneficiary of potentially lucrative gains in this sector, large foreign investment firms began investing heavily in other well-known private academies in 2007. But most saw their dreams of riches sour as the institutes delayed their plans to go public after the industry was hit by a global economic slowdown stemming from the U.S. subprime mortgage crisis in 2008 and the more recent fiscal crisis in the euro zone.

In recent years, Goldman Sachs and Lehman Brothers invested a combined 30 billion won ($26.5 million) in Ellim Edu, a cram school in affluent southern Seoul that prepares essays to help children pass their college?entrance exams, in hope of cashing in. Given its reputation and long waiting list, the school seemed like a sure bet.

However, it was delisted from the local exchange in January 2011 after less than 11 years as its share value shrank. This occurred after the outgoing Lee Myung-bak administration scaled back the importance of essay writing in the college admission process.

Meanwhile in 2007, Carlyle Group invested $200 billion in Topia Academy, which focuses on helping students gain admission to foreign-language high schools. The U.S.-based private equity fund anticipated high returns based on the assumption that Topia’s value would triple or even quadruple after it filed its initial public offering (IPO) on the local stock market, a move that had been in the pipeline for years.

But things didn’t pan out as planned as Topia saw its student registrar dwindle after the Ministry of Education, Science and Technology banned foreign-language high schools from testing students’ listening comprehension skills as a part of university entrance examinations. It also ordered them to not recognize Toefl and Toeic scores, two key English-language tests that serve as many hagwon bread and butter.

The ministry’s move was motivated by a policy decision to downsize parents’ exorbitant spending on children’s private education in 2010, which is considered a drain in Korea’s highly competitive society and also a trend that unfairly privileges the moneyed classes.

“Most of these once-popular academies won investment deals from big foreign funds because the funds approached them based on the forecast of giant returns after they go public,” said the owner of one such academy in Daechi-dong, southern Seoul.

Private academies began to lose their luster to investors after the Lee administration introduced a package of measures to restore parents’ trust in public education and cut their spending on private tutoring. One of these involved giving informants cash rewards for reporting cases of illicit tutoring from 2009.

Mega Study, whose value rose 10-fold within two years of its IPO, is already struggling.

In March, Cornerstone Equity Partners surrendered its position as the institute’s second-largest shareholder by selling its 9.21 percent stake to H&Q Asia Pacific for 110,400 per share, 11 percent lower than what it paid five years earlier.

“In 2007, the market thought parents would continue making bullish investments in their children’s private education, and this industry quickly emerged as an attractive investment target given that hagwon don’t require regular investments in plants or equipment,” said an analyst at a local securities firm. “But such formulae don’t work anymore.”

Park Song-yi, an analyst at Samsung Securities, said the niche industry is unlikely to generate more profit unless the government eases its regulations and the academies diversify their revenue sources.

“Mega Study posted an operating profit of 14.1 billion won in the second quarter, above our estimation of 13.8 billion won, but the figure is still down 40.2 percent from last year,” Park said.