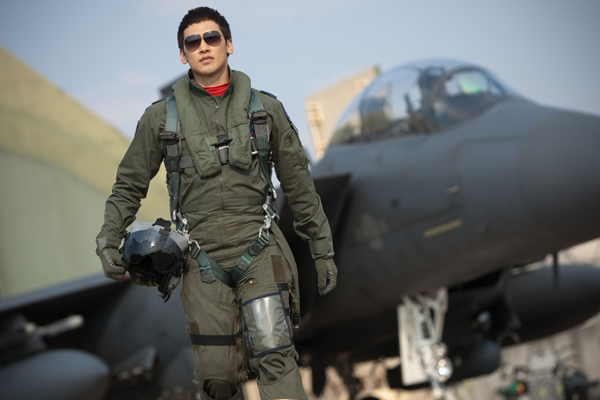 The new action film “R2B: Return to Base” has already been snapped up by 30 nations around the world just a day after being released.

According to the film’s distributor CJ Entertainment, the rights to the movie were purchased by England, France, Germany, Thailand, Turkey, Brunei and Mongolia, among others. The film premiered last night at CGV Yongsan in central Seoul.

The film was highly anticipated due to the participation of K-pop singer Rain. In addition, the film about a group of fighter pilots battling enemies over the skyscrapers of Seoul boasts a cast that includes Shin Se-kyung and Yu Jun-sang.

Directed by Kim Dong-won, the film recruited aerospace experts as well as the Korean Air Force.

Ahead of the film’s release, Shin talked to Yonhap News about what it was like working with her Hallyu co-star. “I was his fan from elementary school and so I was a little intimidated at first,” Shin said. “But he was so easygoing and affectionate, so different from the macho superstar as he is portrayed in media.”