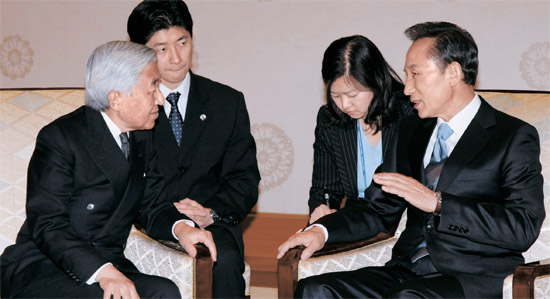 In this file photo, President Lee Myung-bak, right, met with Japanese Emperor Akihito during his visit to Japan in April 2008.

On the eve of Liberation Day to mark Korea’s emancipation from Japan’s 1910-45 colonial rule, Lee demanded the Japanese emperor truly accept responsibility for the country’s wartime aggressions against Korea.

“If [the emperor] wants to come to Korea, I think he should pay visit to the [graves of] Koreans who died while fighting for Korea’s independence and offer a sincere apology. If he is coming to offer words like ‘deepest regret’ after spending months to come up with the message, he shouldn’t bother.”

The president was referring to an ambiguous expression the Japanese emperor used decades ago.

During his meeting with visiting Korean President Roh Tae-woo on May 24, 1990, Emperor Akihito said he felt “the deepest regret” when he thought of the suffering the Korean people underwent during the colonial period.

He deliberately used an unconventional word that expressed his remorse over the issue, avoiding explicitly using the word “apology.”

This comes as the latest in a series of escalated moves by Lee to confront Japan’s reluctance to redress the long-standing grievances over its wartime crimes against Korea.

Last Friday, he made an unprecedented presidential trip to Dokdo, Korea’s easternmost islets, in a symbolic trip to denounce Japan’s frequent territorial claim.

Lee has also stressed the need for Japan to properly address its wartime crimes, including the sexual enslavement of Korean women.

The president’s pointed criticism toward Japan was made yesterday during a teachers’ workshop in Cheongwon, North Chungcheong, to discuss school violence prevention.

After a teacher asked Lee to talk about his Dokdo visit, the president responded with cruel condemnation toward its former colonial ruler.

“Japan has a poor understanding of the position of an assailant and a victim,” Lee said. “And I want to enlighten them.”

“An assailant can forget about his attack, but the victim never does. The victim only forgives,” Lee said, quoting his previous remarks made during a TV appearance in Japan two years ago. “I told [the Japanese student audience] that we can forgive Japan’s brutal subjugation, but will never forget.”

While Lee still said yesterday the two countries need to cooperate in many fields, the president’s latest message, particularly concerning the emperor’s apology, was a clear departure from his previous positions.

In the early years of his term, Lee was a strong advocate of the emperor’s visit to Korea. Lee visited Japan in April 2008, two months after inauguration, and met with the emperor.

At the press conference following his summit with Japanese Prime Minister Yasuo Fukuda at the time, Lee said he did not see any reason for the emperor not to visit Korea.