Cologne, Germany - Local game developers are in the spotlight at Gamescom 2012, Europe’s premier gaming event that kicked off in Cologne on Wednesday (Central European Time), after the organizers designated Korea as an official partner nation this year in recognition of its advances in online and other games.

Korean companies are now grabbing the opportunity to showcase their soon-to-be released titles to gamers and potential buyers from the Continent at the show, which is taking place in a venue four times larger than last year.

Major players including Korea’s Nexon and NCsoft, Japan’s Sony and Blizzard in the U.S. are due to showcase over 300 new titles at the game fair, one of three biggest events of its kind in the world along with E3 in the United States and Tokyo Game Show.

More than 600 game developers from at least 40 countries are scheduled to join the trade fair, up from 557 last year, when 275,000 visitors showed up.

After the event opened to the media yesterday, journalists and game industry figures hailed the rise of online and mobile games accessed via smartphones and tablets, while lamenting customers’ waning interest in consoles. The show opens to the public today and runs until Sunday.

However, there are some major absences this year as Nintendo and Microsoft, which makes the X-box, decided not to join in the festivities. This firmed up suspicions that consoles are on the decline in the European market.

The Korea Creative Content Agency (Kocca) brought 22 small- and medium-sized game developers including MaxOn Soft and Zemi Interactive to help them to find interested parties and business partners in Europe. To facilitate their business meetings, the state-run agency opened a Korean Pavilion on a 345-square-meter (3,713-square-foot) space at one of the event halls.

Separate booths set up by Nexon and NCsoft were hives of activity yesterday as European game developers, investors and potential customers flocked to try their new games.


Nexon Europe unveiled two of its upcoming free-to-play titles including Shadow Company, the next first-person shooter from Doobic Studios, and an online real-time strategy game called Navyfield 2: Conqueror of the Ocean, which was developed by SDEnternet. They will both be released next year, the company said.

Danylo Yudelevynch, a sound engineer from Ukraine who had a go at Shadow Company, said he didn’t realize it was created by a Korean firm until he arrived at the show. He said he was impressed by how easy it was to learn and fun to play.

“Korean game makers still have quite a low profile in Europe, but if they continue releasing high-quality games with rich content here, they’re going to get a good reaction from gamers here,” he said.

Accoding to Kocca, Europe’s game market retreated to $28.9 billion last year from $29.6 billion in 2008 and could shrink further to $27 billion this year. It said Korean firms need to localize their products and services to make them more country-specific in order to penetrate the European markets.

Kim Sung-jin, CEO of Nexon Europe, said the company aims to become a mainstream publisher of online games in Europe within three to four years.

Nexon Europe has been growing at a formidable speed since it set up shop in London in 2007. Nexon’s game portal, its main platform in Europe, welcomed its ninth million member at the end of last year, up from 390,000 users in 2007.

It posted sales revenue of 28.6 billion won ($25.21 million) last year, up 111 percent from 13.6 billion won from a year earlier. When it debuted in Europe five years ago, sales barely amounted to 350 million won. 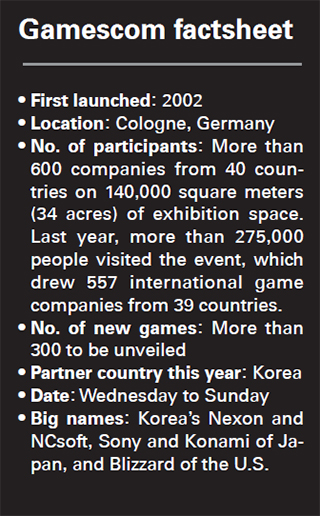 Meanwhile, NCsoft is out in force to promote Guild Wars 2, an online game scheduled to be released in North America and Europe on Aug. 28. In its July 24 edition, Forbes praised the company by saying that “Guild Wars 2 appears to be an impressively ambitious MMORPG [massively multiplayer online role-playing game] in both its sales and its desire to break conventions.”

Samsung Electronics and LG Electronics are also promoting their game-related electronics appliances at Gamescom. LG signed a sponsorship deal with the trade show to provide 300 monitors and 100 3-D TVs during the event.

“There are 250 million German gamers with a market value of 2 billion euros,” said Song Ki-ju, president of LG Electronics’ German unit. “TVs were just seen as a form of home entertainment in the past, but we now live in an era where people play games on their 3-D TVs and smartphones.”

Song said LG expects to post healthy sales of its new TVs in Germany, where demand is strong compared to its European neighbors. Sales jumped 17 percent in the country in July, compared to the same month last year, but recorded minus growth in the rest of the Continent.

In Cologne, Samsung is showcasing laptops that can play games with high graphic content, as well as 3-D TVs and its latest Galaxy S3.

Samsung, which sponsors the World Cyber Games, will run a promotional event for WCG 2012 from Today to Sunday at Gamescom.