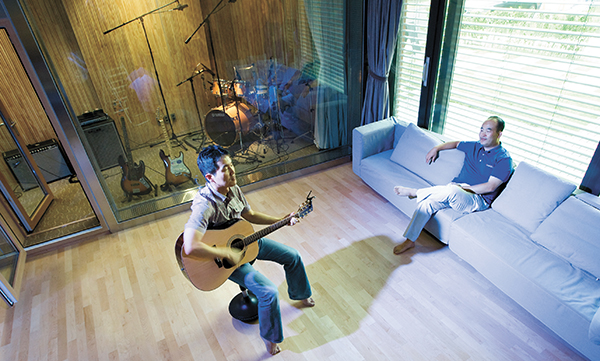 An aerial view of The House of Seven Degrees, a project by Naver’s Kwon Hyuk-il to bring musicians together in a comfortable practice space that has all the essentials for a jam session. By Lee Gyu-yeol


Kwon Hyuk-il is known as one of the founders of Naver, Korea’s leading search engine that accounts for more than 70 percent of all search queries in the country. But like many of his tech-savvy contemporaries in Silicon Valley, Kwon has also pursued his passion for rock ’n’ roll.

The 44-year-old engineer has built a musician’s dream house in Bundang, Gyeonggi, named The House of Seven Degrees after the odd tilt of its protruding wall. The furniture, amps, keyboards and even the mailbox are all tilted in accordance with the architecture.

The House of Seven Degrees is a project Kwon hopes will help musicians come together in a comfortable practice space that has all the essentials for a jam session.

“I’m a music lover, but I’m also not a professional,” Kwon said in a recent interview with the JoongAng Ilbo. “I plan to open this place for indie bands, bands made up of employees and friends, and professional musicians who need a practice room or a recording studio.

“I want this place to be a ‘safe house’ where people gather to play and enjoy music. To be honest, watching professional musicians play and learning from them was also part of the plan.”

Every part of the building is designed with careful regard for its future guests. Attached to the practice room is small kitchen and a place to shower, in case the session gets especially groovy. A cozy guest room sits right next to the stairs leading up to the rooftop.

On the first floor are performance rooms and recording studios. Practice areas are built with glass walls with drum sets, amps and keyboards inside. The floor above is designed as an office and living space.

“I intended this house to be an open space where bands can feel at home on their first visit,” said Kwon’s brother Hyuck-cheon, the 47-year-old architect who designed the building. “I hope my brother’s guests can freely discuss music and business ideas here. It’s designed so that anyone can enjoy music anytime of the day or night.” 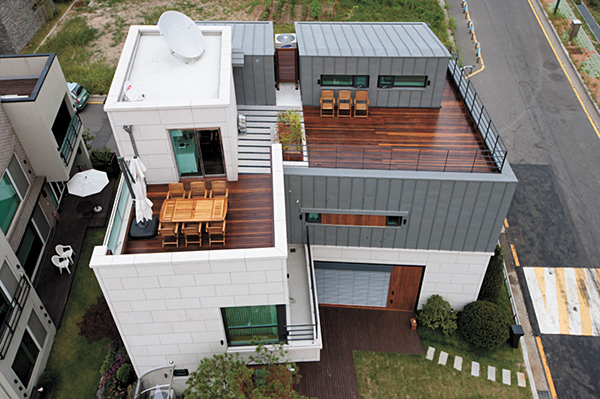 Kwon Hyuk-il, one of the founders of search engine Naver and a representative of NHN’s The Happybean Foundation, plays a guitar at his new house devoted to music in Bundang, Gyeonggi, while his brother, the architect who designed the building, listens. By Kwon Hyuk-jae

Kwon was once an employee of the conglomerate NHN and then focused his energy on establishing Naver. He is currently a representative of The Happybean Foundation, a Web site that allows Internet users to donate to various organizations. But his passion for music led him to create his latest project.

As a young boy, Kwon said he taught himself to play the piano, guitar and drums. But after leading a hectic life, his childhood passion was pushed out of the picture. Now he has found a way to mix business with pleasure.

Kwon is currently learning how to mix in the house.

“I set becoming a composer as my goal while sharing future plans with employees last year. Until today, I’ve been working hard on what I had to do. From now on, I want to devote my energy to what I want to do.”