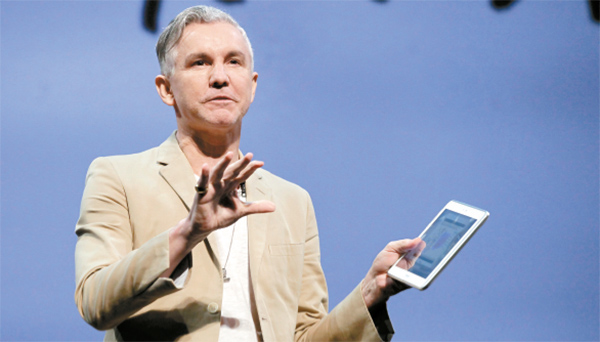 Director Baz Luhrmann discusses his recent use of a Samsung Galaxy Note 10.1 at a news conference on Wednesday in New York. [AP/YONHAP]


Samsung Electronics, the world’s top smartphone maker, said yesterday it has started selling the Galaxy Note 10.1 on its home turf, the latest version of its Galaxy Note lineup, sales of which topped 10 million units worldwide.

The Galaxy Note 10.1, which was first showcased at the Mobile World Congress exhibition earlier this year, is an enlarged version of the 5.3-inch Galaxy Note, a hybrid of a smartphone and a tablet PC. Both models feature the S Pen, a stylus that enables users to doodle and write on the screen.

The latest model comes in a Wi-Fi and 3-G version, and both are available via local mobile carriers SK Telecom and KT. The company does not have plans for a faster long-term evolution version, according to a company spokesman.

The Galaxy Note 10.1, packed with a quad-core processor and a multiscreen feature, is part of the tech titan’s efforts to differentiate its Note series from existing smartphones and tablet PCs amid anticipated releases by rivals.

Apple’s iPhone 5 is widely expected to be launched this fall, while the Nexus 7 tablet, co-branded by Google and Asus, is likely to hit local shelves next month.

The Wi-Fi-only version of the Galaxy Note 10.1 also went on sale in the United States and the U.K. on the same day. In the U.S., the price starts at $499 for the basic model with 16 gigabytes of storage and $549 for the 32-gigabyte model, expandable with an external memory card.

Apple’s latest iPad starts at the same price, and the Note 10.1 offers some features that the iPad doesn’t have, though its screen resolution is lower than the iPad’s. It is Samsung’s first Android tablet equipped with a digital pen and can run two applications side-by-side on a screen divided in half.

Analysts said this capability of the Note tablet is intended to attract business and education customers, a strategy that could be more effective than going all-out against the iPad.