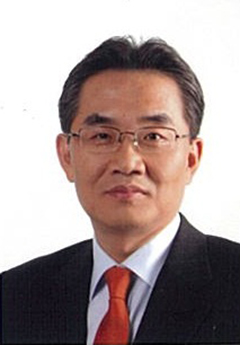 With Chairman Kim Seung-youn in jail for embezzlement, Hanwha Group has embarked on emergency management, putting Choi Keum-am, chief of strategy, at the forefront of the group.

According to a Hanwha employee, Choi called on managers to act prudently to overcome the current crisis in a message posted on the group’s Intranet service yesterday.

“We will continue with our plan to foster future growth engines despite the current crisis,” Choi said. He said Hanwha is undergoing a critical time in its global expansion.

The strategy chief pledged to continue carrying out major overseas plans, including a 9.4 trillion won ($8.29 billion) project to help build a new city in Iraq.

Choi, who was nominated as the strategy chief in February last year, ranked as the group’s second-in-command.

Kim is known to have complete trust in Choi, who will be able to support the chairman’s eldest son Dong-kwan, Hanwha’s heir-apparent.

Under Choi’s stewardship, the CEOs heading up the group’s major subsidiaries will shoulder more decision-making power and managerial responsibility in the chairman’s absence, the group said.

Meanwhile, Choi will step in to take care of Hanwha’s global business interests, especially two major acquisition plans it is mulling. At least one of these, a plan to purchase the German solar-power firm Q-Cells, will proceed as planned, according to a group insider.

Hanwha initially planned to offer a formal takeover deal to the insolvent company this week before Kim’s arrest on Thursday threw a spanner in the works.

Kim has shown strong interest in the German firm, even sending a task force there in May to conduct due diligence on the company’s production site.

However, the group’s plans to purchase the Southeast Asian branch of ING Life Insurance, based in the Netherlands, and local Tong Yang Life Insurance are likely to collapse, market sources say.

Hanwha had ambitions of climbing to the No. 2 spot in the local life insurance market by taking over Tong Yang, and wanted to accelerate its advance into Southeast Asia by buying the ING branch there.

According to an analyst at a foreign investment bank, the bid for Tong Yang that began late last year is likely to break down without the chairman present.

“Plowing ahead with such huge deals, which require vast amounts of company funds, will be impossible until he returns,” he said.

Kim was sentenced to four years in prison and slapped with a 5.1 billion won fine by the Seoul Western District Court on Thursday for embezzlement and breach of trust.