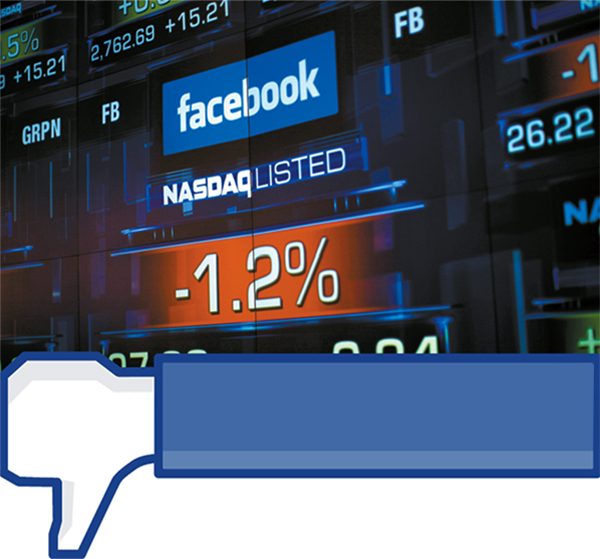 Monitors show the value of Facebook’s stock during morning trading at the Nasdaq in New York in this June 4 file photo. Facebook shares have been on a downward spiral ever since. [REUTERS]


Skepticism about whether social media companies are a good bet for investors is growing after the recent fall in the value of Facebook shares and the absence of a solid profit model among other formerly high-flying stocks in the field. This is stoking fears about the possible side effects upon the domestic SNS industry.

Facebook’s disappointing initial public offering in the middle of May, and its less-than-stellar first earnings report as a public company, set alarm bells ringing. One month later, a disastrous earnings report by California-based Zynga, which develops social media games, on July 25 sent its shares into a free fall.

These, coupled with other negative indications, led a number of local analysts to forecast that the global social media bubble is on the verge of bursting.

After Facebook and Zynga shares slumped to record lows, the former is set to unblock approximately 1.6 billion shares from Thursday, causing concern that a sudden influx will cause the price to drop further.

Facebook stocks sank 7.1 percent on Thursday to mine a new record low - or about half of its original IPO price - as some of the world-leading social networking site’s early investors got their first chance to dump their holdings since the company went public.

In the wake of the Facebook fiasco, leading mobile game companies in Korea such as come2us, JCE and Gameville all performed poorly last month, with their respective stocks falling 1.13 percent, 1.7 percent and 1.99 percent on July 27. This bucked the day’s trend as the Kospi surged 2.6 percent.

Debate has raged about just how worthy local social media platforms for mobiles are of investors’ attention due in part to the limitations in terms of the variety of advertisements they can run - a major source of income - and their relatively slow Internet speeds, which tends to turn consumers off.

“Most domestic smartphone users are on a 3-G network, and traffic still gets overloaded on KakaoTalk, the country’s largest mobile messenger, due to server management issues. This problem will intensify whenever new business models are adopted,“ said Jung Woo-chul, an analyst at Mirae Asset Securities

Moreover, the problem of social media businesses turning their popularity into profit is also clouding expectations and triggering alarms of low revenue growth.

NHN’s KakaoTalk has been suffering massive losses due to the lack of a solid profit model, even though its more than 44 million users were sending over 1.2 billion messages a day as of February. It posted a net loss of 4.05 billion won ($3.57 million) in 2010 and a yawning deficit of 15.26 billion won last year.

Other domestic SNS services such as Line and My People are experiencing similar situations: After successfully poaching users from the paid-for SMS services of existing mobile operators, they failed to cash in on their potential bounty.

As profits remain elusive, a number of analysts see most social media businesses as having hit a plateau after rapid early growth, with a dip expected to follow.

However, researchers at securities firms say the adaptability of domestic mobile SNS operators is far superior to the foreign companies like Facebook and Zynga.