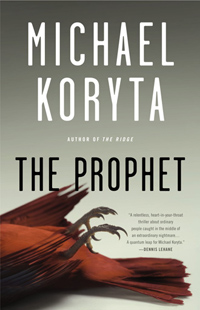 Divided by the abduction and murder of their teenage sister decades ago, two brothers in a small Ohio town must overcome their adversarial relationship when faced with a new killing that has seemingly random ties to each of them.

In “The Prophet,” the ninth novel from 29-year-old Michael Koryta, one brother feels the guilt of allowing his sister to walk home alone and finds solace in cigarettes, alcohol and dealing with the flotsam of life as a bail bondsman.

The other stokes the aspirations of young men as coach of the high school football team in the decaying former steel town. His atonement is visiting prisoners to lead a Bible study class.

Koryta, a former private investigator and newspaper reporter with a degree in criminal justice, splits his time between Bloomington, Indiana, and St. Petersburg, Florida, and has seen his work published in 21 countries.

He talked about the book, how he formulates the story and characters and his penchant for the crime genre.

Q. How did you compose these characters?

A.An aunt I never met was killed by a drunk driver walking home from school. It was a substantial story in my mother’s family. Since I was young, I thought of a book on the loss of a sibling. How people would cope with grief over time. My mother’s father was a minister. My father’s father was anything but a minister. In the book one character coped by going the faith route, a family. The other became a bail bondsman, a violent man, a drinker. They have parted ways completely until a new crime forces reconciliation.

Did you do a lot of research?

I did, particularly with the football side of it. One character is a coach. I wondered what demands there were on the family side. With the bail bondsman, I had been a private investigator and that I researched through life experience. I worked on it for a little over a year. I researched from the conception of the idea until the last sentence written.

Why did you set it where you did?

My family was originally from Cleveland, I spent a lot of time in the area. I wanted to write about a decaying part of the country, an industrial town with no industry. One of those really unique American towns where high school sports teams can come to represent more than a school. Character shapes and people are very important to me. How a character is shaped not just by events but wherever they live. How that shapes their decisions.

What is your typical work day?

In a typical work day I write 1,500 words minimum. Sometimes I do it in two hours and sometimes in eight, and then I do research and also the business side of it. With eight books out there in the published world, they become like mini-businesses. There is always maintenance and upkeep even after the book is done.

Why the penchant for crime? It’s a terrible topic, people raped and murdered. Have you seen a lot of bodies?

I like to write about things that scare me. Really to explain how people can react in a different fashion and how they cope. I’ve seen one body in person when I worked for a newspaper, a male, 19, gunshot. I saw some accidents and one homicide.

Are you a dark soul?

I think I’m exactly the polar opposite. I found that to be the case with many of the writers who work with very dark material. They tend to be the funniest people in the room, so it may be we’re getting our demons out on the page.

Do you have demons?

Everyone has demons. The one I am most aware of is insomnia.

Why do you write? Do you need the money?

I could not imagine not writing. My mind is filled with ideas and writing provides an outlet. I need to do that like I need to breathe. Everyone needs some level of money. The books are a job. I became a full-time writer after my fifth book was published. At that level it became my day job.

Are you running from something?

Not that I am aware of. Maybe at some point I will look at what I’ve written, look at the sleepless nights and work it out.