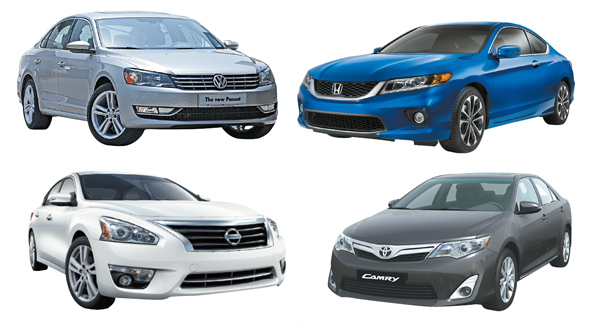 
Foreign automakers are set to shake the local midsize car market in the second half by sending in more models built in the United States as they take advantage of the price competitiveness made possible by the Korea-U.S. free trade agreement.

The Korus FTA went into effect on March 15, slashing tariffs on U.S.-manufactured automobiles from 8 percent to 4 percent. Moreover, as the end of summer usually sees sales of new cars spike in Korea, more new models are rolled out at this time of year than in other months.

The combination of these two factors is seeing Japanese and German brands stand at the forefront of an influx of foreign carmakers that plan to ship more spacious U.S-made cars into the local market as they exploit reduced taxes.

Interestingly, the focus has shifted to the midsize vehicle segment, where cars range in price from 30 million won ($26,417) to 40 million won, setting up potential clashes with local favorites such as Hyundai’s Grandeur (Azera in the U.S.) and Kia’s K7.

Volkswagen, Germany’s largest automaker, recently unveiled its new Passat to local buyers. The diesel model costs about 40.5 million won and is expected to go on sale here later this month, while a gas-powered version will probably come out in October at a retail price of 37.9 million won. The sixth-generation Passat was released here seven years ago.

The carmaker’s flagship sedan, which was sold more than 15 million units worldwide since its launch in 1973, has until now been manufactured at the company’s factory in Emden, Germany. However, the seventh-generation models that are destined for sale in Korea are being built in Chattanooga, Tennessee.

The midsize vehicle has proven a major hit since its U.S. release last September, selling over 100,000 units there in the first nine months. 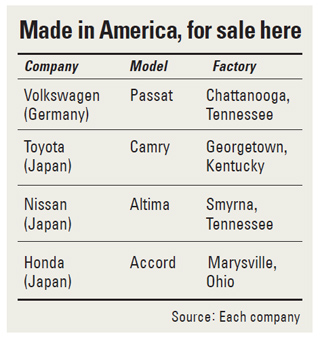 Volkswagen Korea said it is looking forward to seeing a similar success story in the domestic automobile market, with 500 units targeted per month.

“We have 2,000 cars in stock and are scheduled to have 5,000 next year, but we don’t think this will be enough to satisfy demand,” Park Dong-hoon, the president of Volkswagen Korea, said at a test-drive event on Tuesday. “Due to the car’s [high] product quality, we expect to attract customers who are not only interested in buying imported cars, but also domestic ones as well.”

The local unit said money was not the only motivating factor in its decision to import from the U.S., as Passats built in Germany could also benefit from the Korea-European Union FTA, which took effect last summer and offers slightly lower savings. Instead, it said the U.S.-edition has a roomy design that it believes will appeal more to Korean drivers.

The U.S. edition has a longer wheelbase of 2,803 millimeters (110.4 inches), 91 millimeters more than its European sibling. It is also higher and wider.

“We spent a lot of time weighing up the pros and cons of importing the U.S. and European models,” said an employee from Volkswagen Korea’s communications department. “We thought about price competiveness, but we opted for the U.S. version because it is new and better suited to our local customers.”

While German brands are importing U.S.-built models mainly for design purposes, Japanese carmakers are looking to benefit from reduced tariffs to gain an edge in pricing.

The strengthening Japanese yen has been undermining the price competitiveness of Japanese products, a trend that now has Toyota considering expanding the North American production line of its Lexus models.

Japan’s leading carmaker has been shipping its U.S.-made Sienna minivan to Korea since last year, and the new Camry, a popular midsize sedan also made in America, as of this year, both with significant success.

From January to July, it sold 3,292 new Camrys in Korea that were manufactured in Kentucky, second only in sales volume to BMW’s 520d. The bilateral trade pact has kept the price of the seventh-generation Camry between 1 million won and 3 million won cheaper than previous versions built in Japan.

Nissan Korea is hoping to see similar success when it sells its redesigned new Altima here, which is manufactured in Symrna, Tennessee. The local branch of Japan’s no. 2 automaker has not announced a specific release date, but industry sources predict that it will fall around October.

The fifth-generation Altima was released in late June in the U.S. Both gasoline models, including its 2.5-liter four-cylinder and 3.5-liter six-cylinder engines, will be imported to Korea, the company’s local unit said.

Meanwhile, Honda Korea is considering importing its new Accord from the U.S. for financial reasons. The company held an official launching ceremony for the ninth-generation model at its plant in Marysville, Ohio, yesterday. If the new Accord arrives as planned, it will mark the first time that Honda has sold a car built outside Japan in Korea, adding to its lineup of five models in the local market.