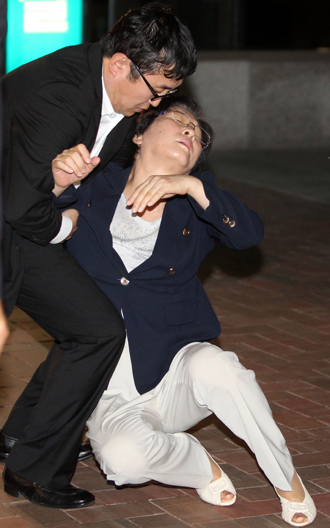 Lawmaker Hyun Young-hee, who was expelled from the ruling Saenuri Party for being implicated in a money-for-nomination scandal, collapses when she leaves the Busan District Prosecutors’ Office about 1 a.m. yesterday following a third questioning by the prosecution that lasted nearly 15 hours. First-term lawmaker Hyun is accused of bribing a member of the nomination committee with 300 million won ($264,000) in return for a National Assembly seat based on the proportional representation system in the April legislative elections. Prosecutors will request an arrest warrant against Hyun soon. [YONHAP]