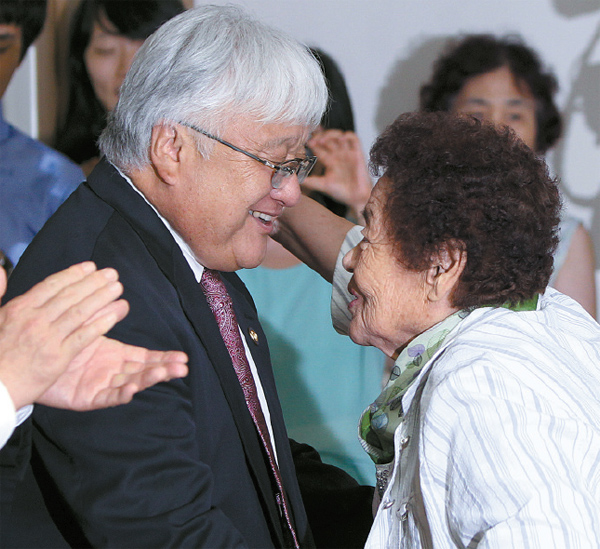 U.S. Representative Mike Honda meets Kim Gun-ja yesterday at a home in Gwangju, Gyeonggi, for women who were forced into sexual slavery by Japan’s imperial army during World War II. Honda and Representative Eni Faleomavaega are vocal advocates for the women. [YONHAP]


Two members of the U.S. House of Representatives called on Japan to act in a more responsible way for the atrocities it committed during World War II during a meeting yesterday with elderly Korean women forced into sexual slavery by the Japanese imperial army.

Japanese-American Representative Mike Honda of California and Representative Eni Faleomavaega of American Samoa, who played leading roles in passing a 2007 resolution demanding an apology from Japan, visited a home for former sex slaves, also known by the euphemism “comfort women,” in Gwangju, Gyeonggi. During the meeting, the two congressmen urged the former colonizer to issue an “unambiguous apology” for the suffering inflicted seven decades ago.

“I want to ask the people of Japan, ‘What if it were your mother and sister?’ Turn the table around and see how you feel, and I know Japanese people would be outraged that such an act of violence was committed,” Faleomavaega told the Korea JoongAng Daily. “We should not tolerate this kind of conduct anymore, especially at a time of war.”

Faleomavaega, who has represented the territory of American Samoa as a non-voting delegate to Congress since 1989, said Korea should erect a bigger “peace monument” than the current statue of a teenage girl dressed in hanbok (traditional attire) in front of the Japanese Embassy in Seoul.

“These women were not prostitutes. They were kidnapped and raped in the cruelest manner, not just for one day or a week but for two years,” he said. “The Korean government should build a national monument remembering their pain, as well as courage.”

“It is insulting [using ‘comfort women’] and does not describe adequately exactly what happened to the Korean women,” Faleomavaega said. “It was sexual slavery in the worst way, subjecting 200,000 Asian women to the suffering.”

The issue of comfort women remains one of the thorniest matters dividing the two neighboring countries. While the Seoul government demands an official apology, Tokyo claims the issue was settled when Japan signed a 1965 treaty that normalized diplomatic relations with South Korea.