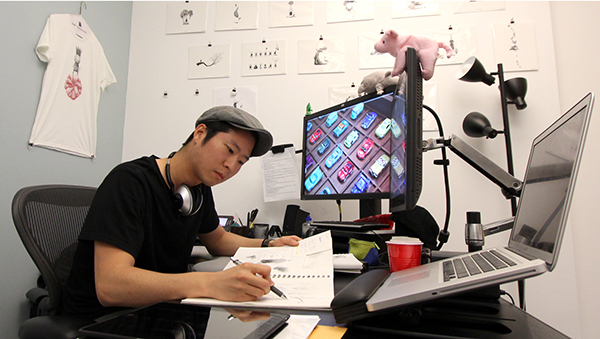 After finishing his day job at Pixar, Erick Oh sets aside an hour to work on his own projects. His vision is to “bridge boundaries” between fine art and animation. Photos provided by Erick Oh


If you think your life is hectic, consider the routine of Pixar animator, independent animation director and illustrator Erick Oh.

He might go to the award-winning film studio to put the final touches on Queen Elinor for the upcoming movie “Brave” by adjusting lip-voice synchronization and polishing facial expressions. Once he arrives home, he’ll likely open a watercolor palette to work on an illustration for his first solo exhibition in New York. There is also some work to be done for an upcoming independent animated short.

Oh is among some 15 Pixar employees of Korean descent. He said his busy schedule is about more than just being prolific. It is about fulfilling his vision through his work at both Pixar and home.

The Korea JoongAng Daily sat down with Oh to discuss that vision and his experience with Pixar. He was in Seoul to attend a screening of “How to eat your Apple” at the 2012 Seoul International Cartoon & Animation Festival from July 18-22 and to promote “Brave,” which is scheduled to hit theaters Sept. 27.

A.Disney movies were a big part of my childhood with their enchanting music and stunning images of “Aladdin” and “Beauty and the Beast.” But that doesn’t mean I made up my mind to become an animator from that time. Animation was somewhat long gone from my life during my teenage years, but I kept an interest in art, which led me to major in fine arts at Seoul National University. The fine arts courses allowed me to mull themes and ideas that I wanted to deal with as an artist. The courses are not about teaching specific art techniques. So I tried hard to figure out on my own which mediums fit my own theme, venturing into various forms of expression, including installation arts and oil painting. I tried animation for the first time in my senior year and found that animation is the medium to best convey my message.

What is the central theme of your work?

It is hard to single out one main theme. I always try to let viewers reflect on the meaning of life and pose questions like “Where do we come from?” and “Where are we going?” I like using symbolic objects to depict the course of life. Some said they watched my movies over and over again to digest the meaning behind the objects, but that’s exactly what I intended: letting people take a moment and reflect.

How did majoring in fine arts affect your future career as an animator?

It helped me think outside the box when creating animated films. I inject something picturesque or some hand-drawn feeling and texture into my animated works rather than making a typical graphic animation. The point here is that I want to bridge the dividing line between animation and fine art. The two sides tend to dismiss each other, with fine arts artists saying animation is not “real” art and animators accusing artists of losing touch with the public. I have been on both sides and I really want to push boundaries through my work.

How difficult was it to make an animated film without taking any course on animation technique in the university?

It was hard at first, because I didn’t have any knowledge on it. My first animated short was “The Bag” which runs about six minutes. But I had to hand-draw more than 10,000 frames to complete it. Even in the second film, I drew about 8,000 frames. It felt like a daunting task, but in hindsight I was able to develop solid foundations in drawing during that period. 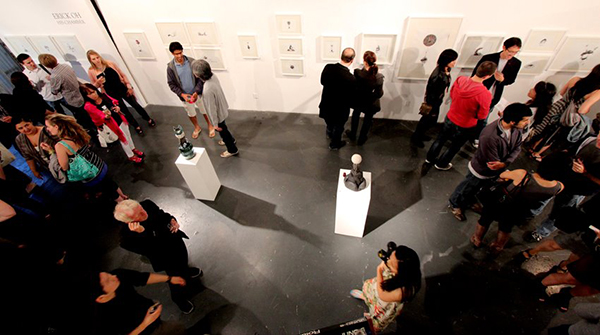 At his exhibit in Los Angeles, Erick Oh navigated themes of life, death and beginning, as well as day-to-day feelings.


How did you go about finding a job at Pixar?

I applied for Pixar’s internship program when I was attending UCLA film school for my MFA. I didn’t hold out much hope, as the internship is known for being extremely competitive with only 10 to 20 spots attracting an international pool of talent. But I got a call from the studio after submitting my portfolio. I was not among the two who were hired as regular staff right after the 12-week program. Unexpectedly, I received a job offer from Pixar one and half months after I finished the internship.

What did you learn from the internship program?

The program assigned working professionals to each intern. I worked in collaboration with a senior Pixar animator. While working as an intern, I was also able to learn how to use Pixar’s programming interface RenderMan, which was developed by the company itself. Even if some interns failed to land a job at Pixar, most of them were hired by renowned animation studios, such as DreamWorks and Blue Sky Studios. 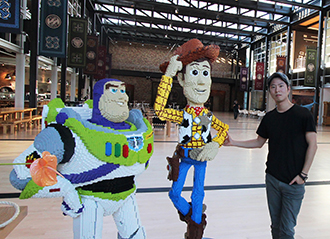 Putting aside the wonderful working environment, I’d say the best part about Pixar is that it is committed to making “genuine film.” The studio prioritizes story over visual effects or jokes that might only entertain kids.

Pixar also offers special courses to employees in order to keep them creative and motivated. There are courses on sculpture, pottery and other art forms. Senior staff are in charge of the program from Pixar University. It frequently holds seminars with renowned experts from various fields and regularly screens award-winning movies.

There also are a number of facilities, such as swimming pool, soccer field and tennis court to rejuvenate employees.

What about the workers at Pixar?

Their backgrounds are as various as their nationalities. One of them worked as a banker on Wall Street, while others were teachers or cooks. They come from countries around the world, from Asia to the Middle East. But they all are really, really brilliant, creative folks and committed to fulfilling their potential and in the end creating a quality animated film that can touch people’s hearts.

How do you manage to produce your own work regularly while working at Pixar?

It’s usually around 8 p.m. when I come home after work. I really want to take a rest, leaving things behind. But I always spend at least one hour on my own work. I usually draw illustrations and frames for animated shorts.

You had your first exhibition May 12 to July 15 at the Lois Lambert Gallery in Los Angeles. What was it about?

The exhibition featured sculptures as well as about 50 illustrations and the “How to eat your Apple” short. I tried to deliver day-to-day feelings that I experienced and more delicate and sophisticated questions about life. Viewers seemed to digest the meaning of the works in their own ways, and I liked that.

What is your future plan?

I will keep working on my own work while trying my best at Pixar. I plan to hold another exhibition in December with other artists in New York. I’d like to sum up the concept as “visual poetry,” dealing with subconscious feelings.