A tinderbox of tension in wake of bloody brawl

A tinderbox of tension in wake of bloody brawl 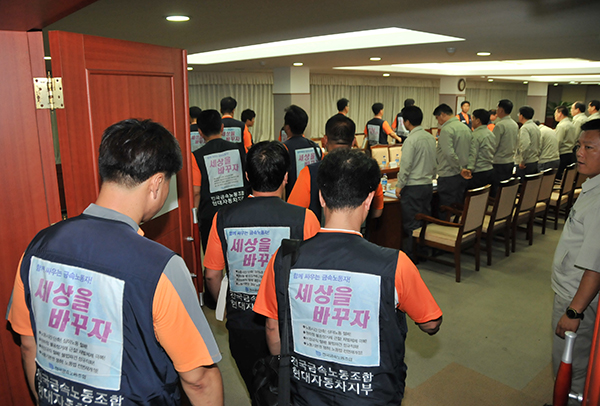 Representatives from Hyundai Motor’s main labor union enter the negotiation room at the company’s factory in Ulsan yesterday for their 18th round of talks. The union clashed with management late Monday night, leaving more than 10 people injured and one reportedly in critical condition. [NEWSIS]


More than 10 people were injured after a series of violent scuffles broke out between a Hyundai Motor labor union and management late Monday night, as striking workers brandishing bamboo poles tried to illegally occupy one of the carmaker’s plants in Ulsan.

According to the automaker, armed members of its militant union for irregular workers tried to wrestle their way into the factory throughout the night and into the early hours, sparking physical clashes with management and security guards.

Hyundai said that 400 members of its union representing irregular workers - including 100 with “wooden spears” - clashed with an opposing force of around 500 people. All of the wounded were from management, with one in critical condition, he added.

The union said its members were also on the injured list, but did not provide exact numbers.

The two sides have been at loggerheads for more than three months as the union has been calling for wage hikes, a relaxed shift system and better conditions for its irregular workers, who are not entitled to the same benefits as full-time employees.

After 17 rounds of failed talks, management offered concessions by agreeing to re-hire 3,000 of its 6,800 irregular employees - all culled from the ranks of in-house subcontractors - as regular workers with improved conditions by 2016. It also promised to kill the graveyard shift, a bone of contention, by reworking the two existing daytime shifts. But the militant union was not appeased, arguing that Hyundai would have to employ that number of regular workers within four years anyway due to its aging work force.

Infuriated and frustrated by the snail’s pace of negotiations, small gangs of irregular workers began blocking the entrance to the meeting room on Saturday in protest. In doing so, they delayed the talks until yesterday.

The talks resumed but to little avail, with Hyundai bringing its original proposal forward by one year to 2015 and the union rejecting it. This led to the attempt to storm the plant, which ended at 4 a.m. when the rally was dispersed, management said.

The protestors regrouped yesterday from 2 p.m. and camped outside the plant to continue their demonstration. Unionists from two other plants in Asan in southeast Seoul and Jeonju, North Jeolla, also participated.

Monday’s six-hour disruption cost the company an estimated 4.2 billion won ($3.7 million) in lost production, or 322 vehicles that were not built, it said. The plant produces best-selling models such the Avante and Veloster.

Ulsan Metropolitan Police Agency said it posted more officers around the plant, adding that any violent demonstrators will be arrested.

Meanwhile, the labor union of Hyundai’s regular workers said it would resume negotiations with management while also continuing a partial strike. Hyundai only negotiates with this union, not the one for irregular workers.

The main union staged a two-hour walkout yesterday and plans to have its members lay down their tools for another four hours today.