Adapt or die for Korean firms in China

Adapt or die for Korean firms in China 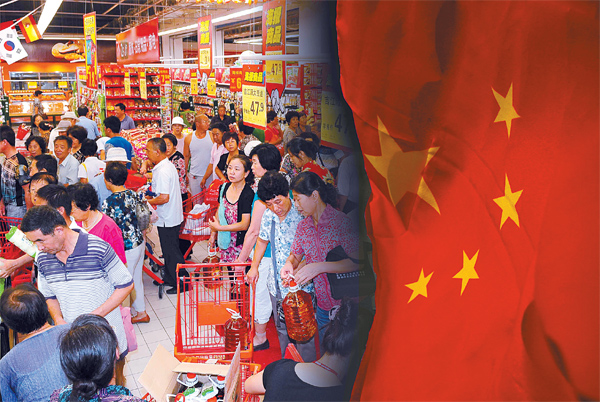 Korean businesses that dream of cashing in on China’s meteoric rise may have to consider upgrading their strategies and tactics for a new Chinese market that is shifting from being the world’s factory to the world’s largest consumer market, China experts say.

Beijing is now pushing for qualitative growth after a decade of rapid quantitative growth. By 2020, it aims to build an affluent country that can boast 220 highly developed cities with population exceeding one million each.

“China’s top priority is to encourage people to spend,” said Li Keqiang, the first vice premier of the Boao Forum for Asia, which launched in April.

Today marks the 20th anniversary of the forging of diplomatic ties between Korea and China. In the interim, the two have become closer than ever. Most of all, China has served as a strategic foothold for Korean businesses to expand their global presence. Korean companies both big and small have headed to China in droves to build factories there and take advantage of its cheap labor costs, geographical proximity to their home market and similar cultural background.

Anticipating a major transformation in the Chinese economic structure and market, experts say there is a need for Korean companies, both those operating in the county and those with designs to do so, to keep track of changes in Beijing’s economic policy directions and attune their strategies to the changes if they want to survive in the market.

According to the Chinese government’s latest plan to advance its economy, it will create scores more cities with population of one million or more within eight years, including eight with more than 10 million residents.

“Beijing is focusing its efforts on urbanization projects as it considers this a key growth engine,” said a recent report from the Samsung Economic Research Institute.

The increasing drive among Chinese to relocate from provincial areas to urban hubs will grow significantly, the report forecasts. Consumption in the private sector is projected to reach $8.6 trillion by 2020, reaching the 56 percent level seen in the U.S. to make it the world’s largest consumer market, it added. Earlier in May, China’s Commerce Minister Chen Deming said the country could achieve this goal as early as 2015.

Lohas, which is shorthand for “lifestyle of health and sustainability,” has become the latest buzzword among Chinese consumers. It refers to a trend of declining spending on food among Chinese households, as a share of their monthly income, while expenditures on products related to well-being, safety and health are on the rise.

“Rather than buying daily necessities, Chinese citizens are likely to spend money to enjoy urban life,” the report said.

“Young Chinese born after 1980 are active consumers in the market,” said Yoon Hong-gil, a Korean student at Peking University. “They hang out at Starbucks and Haagen-Dazs, spending more than 100 yuan [$15.75] on a coffee or some ice cream.” 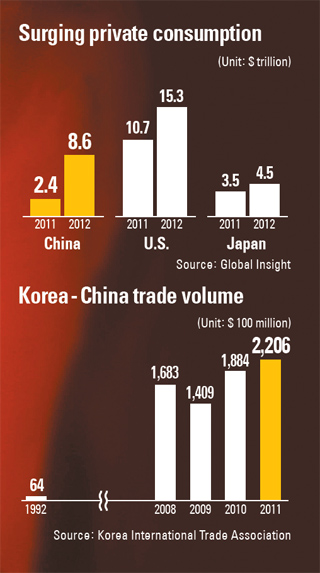 Experts stress that meticulous preparation and highly competitive products are essential to succeed in China today.

Park Sang-gyeon, CEO of Beijing Senong, a Korean company that grows and sells seeds, says there is at least one more magic ingredient needed.

“It is imperative that companies secure local distribution channels, which is a very difficult job,” he said. The 54-year-old entrepreneur has been running his company for 18 years in China. He develops seeds for agricultural produce like radishes and carrots and sells them to Chinese farmers.

“Just as everyone in major Chinese cities would recognize Samsung Electronics’ Anycall brand of mobile phones [which preceded its now-dominant Galaxy series], our seeds are famous among Chinese farmers,” Park said.

His company could serve as a model for other Korean firms hoping to tap the Chinese market, he said.

Beijing Senong, a local branch of Seoul-based Nongwoo Bio, was one of five seed manufacturers granted access to the domestic market by the Chinese government in 1994. For the company, timing was everything as Beijing slammed the door shut for other foreign players one year later. Currently, it is the only Korean seed developer there that has survived the Asian financial crisis in 1998.

Under Park’s stewardship, Beijing Senong has grown to a one of top 10 seed companies in the country. It posted annual sales of 100 million yuan last year.

Most of the sales came from the local market. The company’s flagship products are 120 vegetable seeds, which together occupy about 5 percent of the Chinese vegetable market. Its carrot seeds alone claim a whopping 70 percent, while radish seeds own 50 percent.

As one of his differentiation strategies to make his products recognizable among consumers, Park paints his seeds in a range of vibrant colors.

“It is hard to satisfy Chinese consumers, so an enormous amount of research and preparation is needed,” he said.

True to the adage that the bigger they are the harder they fall, Korea’s retail giants have often fallen flat in the country.

Korea’s top retailer E-Mart has opened 27 stores in China since 1997 but was forced to shutter 11 last year due to poor sales. Lotte Mart is also considering withdrawal from the market as it continues to post annual deficits.

“It seems Korean retailers didn’t take sufficient pains to understand what Chinese consumers want when they go to buy groceries. They just focused on expansion, much as they do in Korea,” said a Korean-Chinese consumer, who said he refuses to go to any of the Korean marts because they lack the products he seeks, adding that he found the Korean-style displays off-putting.

Korean conglomerates are strengthening their long-term strategies toward expanding in China. Successful cases can be summed up as those that are able to “think Chinese.”

Hyundai Motor Group is a case in point. The automaker has rolled out cars for Chinese consumers by slightly adjusting the designs of its Avante (known as Wiedong in China) and Sonata (Lingshang). Both cars are higher with more headroom and bigger and fancier head lamps, testament to Chinese consumers’ love of showy status symbols.

Since it entered the country in 2002, Hyundai has manufactured over 3.6 million vehicles there as of this year. It runs two plants on the mainland with a combined annual production capacity of 600,000 units, and is building another 400,000-unit plant.

Meanwhile, CJ Group, Korea’s food and media conglomerate, launched CJ Foodville, a complex of restaurants, bakeries, cafes and movie theaters to capitalize on the spread of the Korean Wave in China.

The group-owned movie theater CGV plays Korean movies, which attracts a growing number of K-pop fans to hang out at nearby CJ complexes. At present there are 11 of these, but the group aims to expand them to 20 this year, with targeted annual sales of 3 trillion won ($2.65 billion). Samsung Group is also famous for its China strategy. Chairman Lee Kun-hee urged employees to keep in mind that “the group’s strategy for China is also the strategy for its survival.” The backs of its LED monitors it sells in China for use with personal computers are colored red, especially for Chinese consumers. Samsung said it sold one million units of the monitors last year, and launched a new model with the Chinese character for “luck” engraved on the back this year.

Posco’s China strategy is to focus on steel for automobiles. Although Chinese rivals produce steel products at much lower cost, it still sees a chance to thrive in the world’s largest steel-consuming market. China consumes 48 percent of global steel production.

Since the middle of 1992, Korea and China have forged one of the closest trade partnerships seen anywhere in the world, despite complaints from those reluctant to do business with an ally of North Korea at the expense of building bridges with Taiwan.

Seoul and Beijing are now pushing for a bilateral free trade agreement in recognition of the growing importance of each other’s economy. Trade ministers from both sides today wrapped up their third of negotiations on the issue in Weihai, also in Shandong Province.

“Conditions are worsening for foreign businesses on the mainland, including .?.?. growing conflicts between Chinese labor and foreign entrepreneurs recently,” said Han Jae-jin, a researcher at the Hyundai Economic Research Institute.