Federer knocks Young out of the U.S. Open

Federer knocks Young out of the U.S. Open 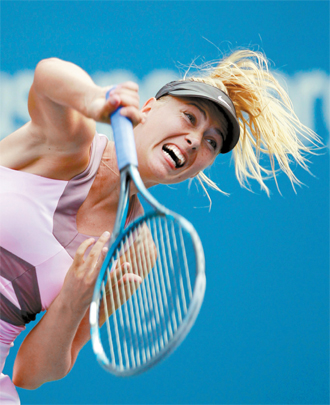 Maria Sharapova of Russia serves to Melinda Czink of Hungary during their women’s singles match at the U.S. Open tennis tournament in New York, Monday. [REUTERS/YONHAP]

NEW YORK - Despite some of the heartbreak he’s suffered here the last few years, Roger Federer has always loved these trips to New York.

Top-seeded Federer played up to his billing Monday night, dispatching American Donald Young 6-3, 6-2, 6-4 to open his quest for a sixth U.S. Open title, which would be an Open-era record.

“The U.S. Open, for me, was always, I don’t want to say easy, but very natural and I’ve always looked forward to it in a big way,’’ Federer said.

Possibly because of matches like Monday’s, in which 20,000-plus fans cheered him on during a breezy-but-comfortable night for a win that took only 1 hour, 34 minutes.

“It’s a place that brings out the best in me,’’ Federer said.

With his Wimbledon title and the silver medal at the Olympics earlier this summer, Federer returned to No. 1 for the first time in 25 months.

There were times when it seemed as if it would never end, most notably in 2008, when Federer won his fifth consecutive U.S. Open.

A year later, he was two points away from No. 6 but Juan Martin del Potro pulled off a five-set victory. The past two years, Federer had a pair of match points against Novak Djokovic in the semifinals, but was unable to convert them.

Federer said he rededicated himself after last year’s loss. This year, he comes in as the top seed, but he considers Djokovic, the defending champion, to be the favorite.

“It’s where he feels most comfortable,’’ Federer said of Djokovic, the No. 2 seed.

Olympic champion Andy Murray began his U.S. Open campaign with a routine 6-2, 6-4, 6-1 victory over Russian Alex Bogomolov Jr. in the first round. The match began with four consecutive breaks of serve before Briton Murray, the third seed attempting to win his first grand slam championship, steadied to win in two hours and 15 minutes.

Maria Sharapova made a convincing start to her U.S. Open title campaign on Monday and then turned comedian as she revealed her build-up had been affected by a “pregnancy” scare.

The Russian was forced to miss events in Montreal and Cincinnati earlier this month because of a stomach bug she first felt on the eve of the Olympic final, in which she lost to Serena Williams.

“I had some tests done, some blood-work, some ultrasound stuff,” Sharapova told reporters after her 6-2, 6-2 win over Melinda Czink of Hungary.

“They said I should just probably rest. I just went home and took Cincinnati off as well. I think it was just a sign that I needed a few weeks off.

“It was really weird. They told me I was fine, not pregnant. I’m like, Can I get my money back?”

Sharapova was reluctant to use the bug as an excuse for the Olympic final, where she was hammered 6-0, 6-1 by Williams.

“It was worse when I got to Montreal,” the third seed said.

“At the end of the day, I think it was some stomach bug. But I thought it was getting better. Then I started eating like the normal Maria and it wasn’t better.”

The rest seemed to have done her good though as the Russian coped well with a testing wind and humid conditions to see off Czink with a minimum of fuss.

Stosur needed only 51 minutes to reach the second round with a 6-1, 6-1 rout over the 64th-ranked Croat on the Arthur Ashe Stadium court.

“It was fantastic,” said Stosur, the Australian seventh seed. “It was great to get out there again. I felt like I was ready to go. First match up, first day, was a good start, so I certainly won’t complain about being out there.”

Shortly after the 28-year-old Stosur left the court fans scrambled for cover as a heavy rain pelted the National Tennis Center grounds at Flushing Meadows.