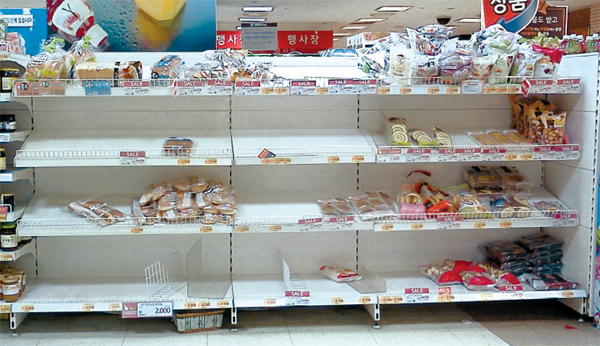 Supermarket shelves that would normally contain confectionaries lie empty at a store in Goyang, Gyeonggi, on Monday afternoon, as citizens flocked to purchase emergency food and daily necessities as well as duct tape in preparation for Typhoon Bolaven. [NEWSIS]


As Typhoon Bolaven churned toward the country yesterday, sales of major daily necessities including bottled water and candles surged at major discount chain stores and supermarkets, according to the retail industry.

In preparing for possible power outages or cuts in the water supply due to the typhoon, which sank Chinese fishing vessels off Jeju and lashed Seoul with blustery winds, sales of instant ramen, canned food, portable gas and batteries also soared.

According to industry sources yesterday, sales of flashlights surged 1,408 percent between Saturday and Monday, while packing tape used to protect windows soared 461 percent over the same three days compared to the year-earlier period.

Homeplus recorded similar jumps in demand as panic set in and the public hunkered down fearing the worst.

“Messages on Twitter and Facebook, as well as breaking news delivered via smartphones, created a greater sense of anxiety among the general public, which seems to have greatly bumped up sales of basic necessities and emergency supplies,” said an employee at Homeplus.

Flashlights, which stores usually sell two or three in a day, were selling at a rate of 30 to 40 on average, while stores reported sales of duct tape jumping around 14-fold.

At convenience stores, demand for meal replacement products also surged. Demand for newspapers exploded as they are known to be effective means of preventing windows from breaking when pummeled by powerful winds.

At GS25, sales of umbrellas, candles, flashlights and batteries also shot up.

At 7-Eleven, bread and instant rice rose by 32.3 percent and 28.2 percent, respectively, from Friday to Monday.

GS Supermarket reported that jittery consumers increased their purchases of candles and flashlights by around 1,000 percent.