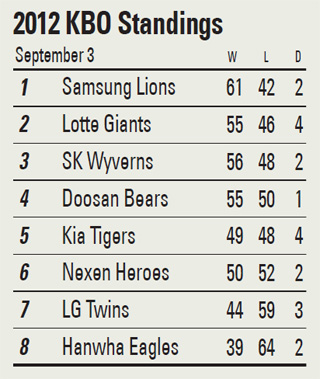 As the regular season enters the home-stretch, jostling for playoff positions has grown increasingly intense with every passing series. This week will see a pair of critical matchups with postseason implications.

Currently in fifth place after overcoming a sluggish start to the season, the Kia Tigers sit three games behind the Doosan Bears, who are holding onto the final playoff spot in fourth place.

The Tigers’ season will be put to the test when they take on the Lotte Giants at the Sajik Stadium in Busan tonight. After facing the Giants’ bats, they will go up against the strong rotation of the third-place SK Wyverns in a three-game series.

Only the top four teams in the Korea Baseball Organization make it to the playoffs, which start in mid-October. Each of the league’s eight teams has about 20 to 25 games left.

The sixth-place Nexen Heroes are also in the hunt, trailing the Bears by 3.5 games with 22 left. The Heroes are off for the early part of the week, allowing American pitching duo Brandon Knight and Andrew van Hekken time to rest.

The Heroes will play in a playoff-caliber series against the Bears starting with a double-header on Thursday, during which both Americans are expected to take the mound. Knight and van Hekken have 13 and nine wins, respectively.

The Samsung Lions continue to sit comfortably in first place, leading the league 5.5 games ahead of the Giants.

In the KBO, the winner of the regular season earns a berth to the Korean Series. The Lions are looking for their sixth pennant.

The Lions play a double-header against the seventh-placed LG Twins today and then play the Bears on Friday.

This week is also crucial for the Giants, Wyverns and Bears, who are only split by 2.5 games. Each team has 21 games left.

The Giants will try to extend their current two-game advantage over the Wyverns during a four-game series against the last-place Hanwha Eagles beginning Thursday.

The Bears have three double-headers this week and will have to stay energized throughout to hold onto the league’s final playoff spot.