For 40-something women, jobs scarce

For 40-something women, jobs scarce 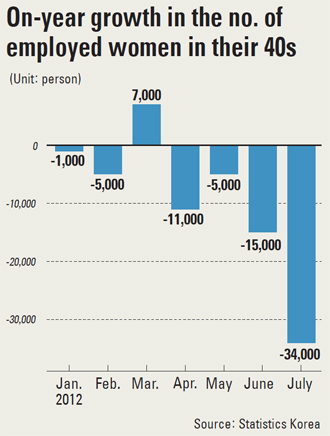 As the domestic economy undergoes a slowdown with shrinking consumption, jobs for women who are in their 40s are disappearing.

According to Statistics Korea, the Ministry of Employment and Labor, and the Ministry of Strategy and Finance yesterday, growth in the number of employed women in their 40s fell by 4,000 in June and by 19,000 in July compared to a year earlier.

The number of employed men did not change over the same period.

For women older than 40, their contribution to the workforce has been consistently declining throughout the year as their numbers have dwindled, with March being the only exception.

In the three months from May to July, the rate at which they have been dropping out the of the workforce has grown exponentially, with 5,000 fewer employed on-year in May and 34,000 fewer working in July than one year earlier.

On the contrary, men over 40 have enjoyed better job prospects since March 2010, with their employed numbers on a steadily rising trajectory in annualized terms. In July, 15,000 more were in engaged in gainful employment than one year earlier.

This trend was evident despite their swelling demographic as a share of the total population.

By industrial sector, jobs in the retail, accommodation and restaurant industries, where the majority of women between the ages of 40 and 50 work, have been vanishing at the most alarming rate.

About 38,000 jobs have disappeared from the retail sector in the past two months. The accommodation and restaurant industries lost about 80,000 jobs each over the same period.

There were sharp drops in the number of temporary female workers, contributing to the overall drop.

At the same time, more women over 40 are apparently abandoning their job searches, a trend that has contributed to the shrinking workforce over the last four months.

“Women in their 40s are usually willing to work to make ends meet, but they have been among the most affected by the current economic conditions,” said Sohn Min-joong, a research fellow at Samsung Economic Research Institute. “Private businesses are tending to cut jobs due to contracted consumption and falling profits.”

“As the average age of women who give birth is also rising, more older women are staying home to take care of their young kids, which keeps them from seeking jobs,” said an official at the Labor Ministry. “Businesses, especially restaurants, are more likely to hire younger employees than middle-aged women.”