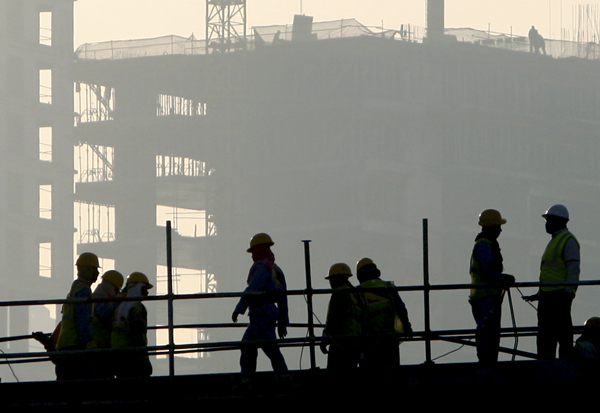 As overseas construction projects continue to surge, local builders are on the prowl for talented new recruits while also mapping out unprecedented welfare packages to secure the loyalty of their existing workforces.

Having struggled with a sluggish real estate market for years, local builders have increasingly been looking beyond Korea’s shores in search of new revenue sources.

According to the International Contractors Association of Korea (ICAK), 682 local builders were working on 1,883 projects in 109 countries as of Aug. 28, with 170,000 workers on-site. This marks the highest number of projects to date, according to ICAK records.

However, only 16,000, or 9.2 percent, of the workers are Koreans, according to the association. This marks a dramatic shrinkage from 1981, when they made up 79 percent of the 180,000 workers stationed at overseas sites by local builders.

Since April, Samsung Engineering has been collaborating with matchmaking service providers and wedding consultants to help its young overseas workers find dates or even potential spouses waiting for them when they return home to Korea.

The company said it offers the program to six employees a year, and only those who have been on the payroll for at least 12 months are eligible.

Daewoo E&C has been offering a similar program to its unmarried employees overseas since November. The builder also sends gifts to employees’ relations on their birthdays to show it cares.

Daelim Industrial has been offering two- or three-week vacations every four months to its overseas employees, as well as free passes to luxury resorts in Korea. As a further sweetener, it has been handing out concert and museum tickets to their family members in Korea.

Other companies are giving wage hikes and promising fast-track promotions to new recruits who sign up to head overseas.

GS E&C recently decided to give financial incentives to its long-term overseas workers. Employees who have worked more than three years outside Korea can receive an extra 600,000 won ($528) a month, it said.

Hanwha E&C, which won a huge project in Iraq worth $8 billion four months ago, has set its basic wage for overseas workers at almost double that of domestic staff. The company is also taking out life insurance policies worth 1 billion won for each worker in the country.

Daelim Industrial has also begun offering internships for overseas workers, who will get the chance to become regular employees after they conclude one-year contracts.

Builders are also reinforcing their foreign-language programs so staff can prepare for a more comfortable experience living overseas.

Hyundai E&C, which won a project to build a refinery in Venezuela in June, recently opened Spanish and French classes. It has run English courses since 2007.

Hanwha offers English and Arabic courses, while Samsung C&T has from this year established courses on language, culture and business etiquette for the countries in which it operates.

But industry watchers say that more government support, such as tax cuts, is needed to help the companies with their recruitment drives.

According to a recent report by the land ministry, local builders will probably need an additional 2,200 Korean workers this year to fill up positions overseas, and an extra 14,000 by 2015.

To help plug the gap, the government and ICAK, the Korea Institute of Construction Technology and the Korea Plant Industries Association have been offering training programs since 2009 that are specifically designed for the overseas construction business.

The number of people taking these programs will likely reach 3,600 at the end of this year, with 70 percent of graduates so far having already found well-paid positions, the association said.

“This will also help tackle the chronic rate of unemployment among young Koreans,” said Kim Jong-kook, chief of the ICAK’s education and training division.