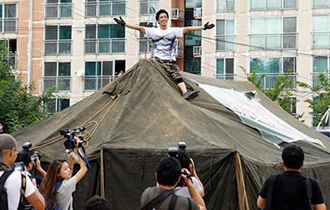 Online debate on whether it is possible for one person to set up a 24-person military tent, called a T24, spread fast among many SNS and Internet users.

One SNS user, with ID Lv Bug, said he would prove it is possible and hundreds of people gathered Sinwon Elementary School in Yangcheon District, western Seoul, Saturday afternoon, to watch.

Lee Sang-nak, set up the tent in 85 minutes and the feat was streamed through Internet sites such as Africa TV and Ustream. “T24” topped the real-time key word lists on major portal sites, such as Naver, on Saturday.

Some celebrities added excitement to the event, with K-pop singer Lexy performing and comedian Nam Hee-seok promising a hotel voucher to the challenger if he succeeded. In a tweet Saturday, Nam said Lee will get a one-day voucher at Paradise Hotel in Busan.

The Ministry of Defense also acknowledged in its official tweet that a difficult mission was well done.