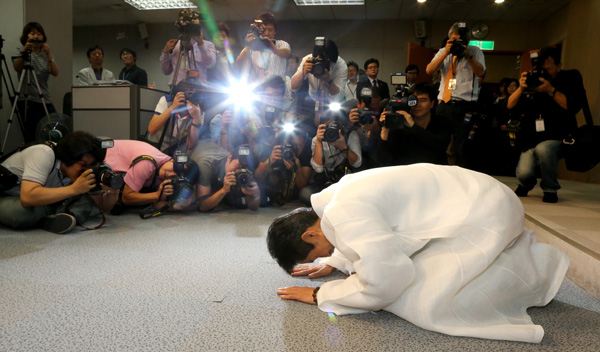 Kang Ki-kab, chairman of the minor opposition Unified Progressive Party, takes a bow at a press conference he called at the National Assembly to announce he will retire from politics. [YONHAP]


Kang Ki-kab, chairman of the minor opposition Unified Progressive Party, yesterday said he will leave politics, taking responsibility for the primary-rigging scandal and the deepening factional conflicts among members.

“The UPP has been declining, exhibiting humiliating fights and ugliness to the general public,” Kang said at a press meeting at the National Assembly yesterday. “I couldn’t restore the party and stop the rift. I feel guilty and seek your apology.

“Although we made our best efforts toward reform and unification, the UPP is faced with the worst situation, the split of the party,” he said. “It’s all my fault. Remembering all the happy memories with party members, I will give up my position in the UPP.”

Kang said he will return to his hometown but didn’t answer questions from reporters on whether he would retire from politics.

Kang is a well-known personality at the National Assembly. Clad in traditional clothing, he has passionately defended his positions, particularly in opposition to the Korea-U.S. free trade agreement, resorting to foul language and even violence, which led him to be fined 3 million won ($2,656) in 2008.

Taking his leave as an opportunity, a number of UPP members protesting the hard-line members of the largest faction told reporters that they are planning to defect from the party today.

Particularly, approximately 3,000 members who were former members of the People’s Participation Party led by Rhyu Si-min, a UPP co-chairman, said they will defect from the UPP.

Three of the party’s seven geographic lawmakers - Kang Dong-won, Sim Sang-jeong, and Roh Hoe-chan - will also follow them and join the four former proportional lawmakers who recently volunteered to be expelled from the party. All of the seven lawmakers will maintain their seats as independents, under the current law.

The defectors are expected to form a new party, along with the seven lawmakers.

If they do so, the UPP will have only six lawmakers remaining - three geographic and three proportional - and receive a reduced amount of government subsidiaries handed out based on the number of parliamentary seats they hold.

Previously, the UPP had been given about 700 million won ($620,000) of state funds for its 13 parliamentary seats for the second term of this year.

Lee Sang-kyu, a UPP geographic lawmaker in southern Seoul and a core member of the party’s largest faction, convened a press meeting. Some of the remaining members said they planned to file a lawsuit against the party leadership for permitting the four proportional lawmakers to be expelled.

If they win the case, the permit will be nullified, and the four lawmakers should determine whether to stay in the party or leave it.

If they leave, not being expelled, they will lose their seats in the legislature and other UPP members will fill their posts.