Psy teaches Britney Spears the moves on the Ellen show

Psy teaches Britney Spears the moves on the Ellen show 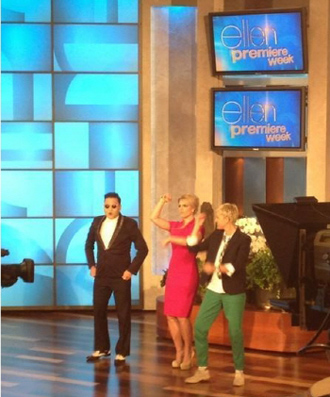 Britney Spears got her wish as she finally had someone to show her how to dance like Psy.

While on The Ellen Degeneres Show, Spears was in for a surprise when Ellen said that she brought none other than the Korean sensation Psy to help Spears out.

“You tweeted that you wanted to learn,” said Ellen of Spears’ rant online when last month she commented on Psy’s “Gangnam Style.”

With that, Psy appeared and taught Spears and Ellen the dance that is characterized by “dressing classy, dancing cheesy.”

While on the NBC TV talk show, the K-pop singer went on to introduce himself as “Psy from South Korea,” and was told by Ellen that he was loved by all.