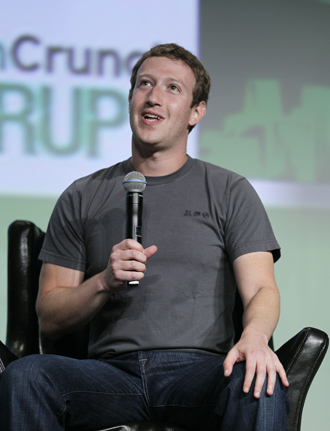 SAN FRANCISCO - Facebook CEO Mark Zuckerberg hasn’t enjoyed seeing his company’s stock get pummeled on Wall Street this summer, but he is relishing the opportunity to prove his critics wrong.

“I would rather be in a cycle where people underestimate us, because I’d rather be underestimated,’’ Zuckerberg said Tuesday. ``I think it gives us the latitude to go out and make some big bets.’’

Zuckerberg, 28, made his remarks before a standing-room-only audience at a tech conference in San Francisco in his first interview since Facebook’s rocky initial public offering in May. The social networking leader’s stock has lost nearly half its value since the IPO. More than $50 billion has been lopped off Facebook’s market value as the company’s shares have fallen from $38 to Tuesday’s closing price of $19.43. No one has lost as much as Zuckerberg, who has seen the value of his Facebook holdings fall more than $9 billion. Zuckerberg emphasized that Facebook cared about making money as well as pursuing his mission to make the world a “more open and connected place.’’ He also repeated his belief that the company would figure out numerous ways to profit from the growing number of its 955 million worldwide users who visit its online hangout through mobile applications instead of Web browsers on desktop computers. Zuckerberg said the performance of Facebook’s stock “has obviously been disappointing,’’ but he said it’s a great time to “double down’’ on the company’s future.

“I think it is really easy to for folks to underestimate how really fundamentally good mobile is for us,’’ Zuckerberg told his interviewer, former blogger turned venture capitalist Michal Arrington, at the TechCrunch Disrupt conference.

Zuckerberg shouldered some of the blame for the misconceptions about Facebook’s mobile prospects, saying he made a mistake by initially relying on a Web programming language called HTML 5 so the company’s applications could run on a multitude of different mobile operating systems without making a lot of changes. That resulted in sub-par experiences for many users, Zuckerberg acknowledged, prompting Facebook to use more customization tools to account for the differences in the software that run on different devices such as the iPhone and Android phones.

Some investors evidently liked what Zuckerberg had to say. Facebook shares gained 66 cents, or 3.4 percent in Tuesday’s extended trading after he took the stage. The ubiquity of smartphones has created problems for Facebook and other advertising-dependent Internet companies because the smaller screens on those devices have less space to show commercial messages around the main content.

One way Facebook will address that challenge is by inserting more ads into the mobile news feeds that highlight status updates and photos shared by users’ friends and families, according to Zuckerberg. He once again tried to shoot down recurring speculation that Facebook is developing its own smartphone like Apple and Google.

“It is so clearly the wrong strategy for us,’’ Zuckerberg said. “It doesn’t move the needle for us.’’

But that doesn’t mean Zuckerberg doesn’t appreciate the power and allure of a sleek smartphone. He said he even used one to write a lengthy manifesto about his vision for Facebook that was included in the company’s IPO documents. Zuckerberg indicated Facebook is likely to intensify its rivalry with Google by developing more ways to search on its Web site. As it is, Facebook already processes about 1 billion search requests a day, Zuckerberg said, “and we basically are not even trying.’’

That laid-back attitude toward search will eventually change, Zuckerberg said, although he wouldn’t provide specifics. A more robust search engine “would be one obvious, interesting thing for us to do in the future,’’ he said.

Zuckerberg has signaled his faith in Facebook’s stock by pledging not to sell any of his more than 503 million shares for at least another year, even as some of the company’s early investors and employees reduce their holdings.