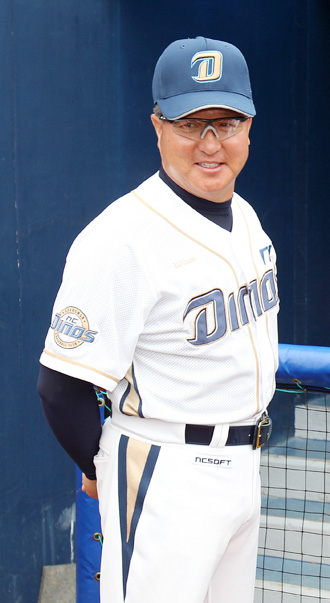 Kim Kyung-moon, the manager of the NC Dinos, was resolute that the club will not be the doormat of the KBO when it makes its debut in the first division of Korea’s professional baseball league next year.

Founded in 2011 as the ninth team in the KBO, the Changwon-based club was put in the Futures League for this season, but the club proved that the minors are too easy of a test for the professional-caliber players, clinching first place in the league on Tuesday with six games left.

The Dinos lost 11-5 to the Samsung Lions’ minor league team yesterday, but with 57 victories in 95 games, the Dinos are the comfortable leaders of the six-team Southern Division of the Futures League, 12 games ahead of the runner-up Nexen Heroes’ minor league team.

Speaking to a group of reporters after Tuesday’s loss, Kim, former manager of the Doosan Bears, said that the underdog club will put up a good fight in the KBO, pledging to make the best use possible of its young roster.

Four star high schoolers that played during the U-18 World Baseball Championship in Seoul earlier this month, including the KBO’s highest drafted pitcher Yoon Hyoung-bae, signed with the Dinos.

At the meeting with reporters, Kim also denied a rumor that he is trying to bring in Park Chan-ho, the former Major Leaguer, from the Hanwha Eagles for the next season. Park, who holds the record for the most wins in MLB for an Asian player with 124, graduated from the same high school as Kim in South Chungcheong.

The following are excerpts from Kim’s chat with reporters after the game.

Q. You have clinched first place in the Futures League. How do you feel about this accomplishment?

A. The countdown has begun. The past one and a half years have flown by like an arrow. I am happy that we clinched the title earlier than we thought we would, but our goals are not in the minor league.

The victory in the Futures League is something that we take for granted, and we have prepared steadily for our entry into the KBO. Our players appear to have mastered how to win through their experiences. If they continue to keep this state of mind, I think we will have good results next year.

You will soon enter your final training session before entering the first division. What will you focus on during the training?

I hope it will be another competitive opportunity for our players. In October, new recruits such as Yoon Hyoung-bae will join the team. In November, we will also bring the players from the existing eight clubs, one from each team. I will try to increase the potential of the players through competition.

Which areas do you feel your team is lacking in?

Overall, I think we are at 50 percent completion to meet our initial goal of what we should be. Above all, I want to supplement the pitching staff. If foreign players and designated players join the team later, we will be able to become a more organized team.

What are your expectations for the 2013 season?

We have no intention to be a team that’s easily beaten. We will be the youngest team in the KBO in 2013 and the other teams will target us and try to have their way with us, but we should not be affected by that.

We may be short on experience, but we have prepared enough not to be prey for other teams. We will show a confident, solid performance throughout.

Rumors about Park Chan-ho are swirling. Are they true?

I have received many questions about Park Chan-ho. It is true that I have a personal acquaintance with Chan-ho. But, it won’t happen that I, a manager, bring players belonging to other teams by breaking business ethics.