Pierre Rigal, who was a track and field athlete before becoming a professional dancer, says his first goal as a choreographer is not to be beautiful, but to be efficient. Provided by the LG Arts Center

Everybody is talking about the new “it” choreographer from France, 39-year-old Pierre Rigal. His most recent project “Theatre of Operations,” which features nine Korean dancers, will be showcased today and tomorrow at the LG Arts Center in southern Seoul.

Rigal was the man behind the closing performance of the internationally renowned 2010 Avignon Festival, a testament to his rising prestige.

The 70-minute performance at the LG Arts Center is about war and the chaos and conflict people come across during battle.

With such proficiency in choreography, one might think that Rigal has been dancing his whole life. But the Frenchman was actually a track and field athlete whose specialty was the 400-meter hurdle before he entered the world of dance.

At the age of 23, Rigal suffered a serious injury that put an end to his dream of becoming a professional athlete. But he found a new way to stay active and express his artistic creativity at the same time.

Rigal’s background has infused a unique flavor to his dances, with many describing his choreography as resembling acrobatics. He also has an athlete’s way of looking at his performances.

When the JoongAng Ilbo met with Rigal last week, he started off the interview by saying, “My first goal is not to be beautiful, but to be efficient. I focus on what move fits in best with the chosen theme.”

He added that an athlete running out of breath and reaching an endorphin-releasing state is what he tries to make many of his dances resemble.

Rigal’s athletic past is not the only influence seen in his choreography. His work as a documentary filmmaker also comes out with the development of his dances clearly based on narratives.

The famed dancer visited Korea for the first time two years ago when he attended a workshop presented by the Korea National Contemporary Dance Company. When asked about Korean dancers, Rigal said that they are energetic and efficient at self-directing.

Rigal opened an audition for “Theater of Operations” last November. About 70 people applied for the spots. Since Rigal did not know much about Korea, past experiences and educational backgrounds didn’t weigh as heavily as they would at a typical Korean audition for such a prestigious opportunity.

Rigal said he did not even look for advanced techniques, but rather considered maintaining balance as the crucial element. He also looked at how dancers could express their feelings through their movements depending on various given situations.

“I looked for those who could dance happily,” Rigal said. 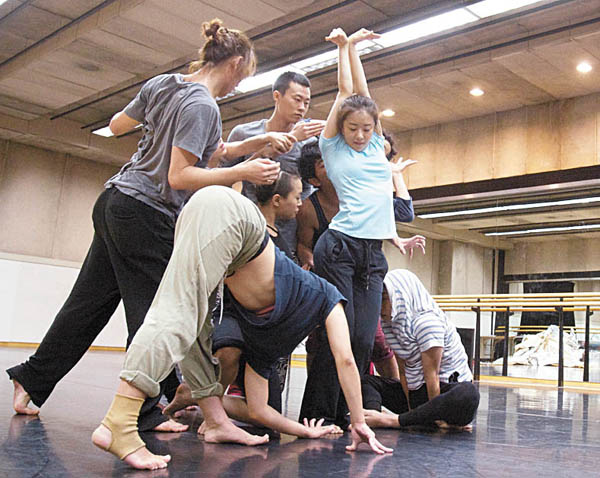 A rehearsal of “Theater of Operations,” a new performance by French dancer and choreographer Pierre Rigal


The choreographer came back to the peninsula at the end of July. There were only five weeks left until the performance and many wondered if that was enough time.

“Practicing for five hours a day for five weeks is enough,” said Rigal.

He added that he had already planned out the performance’s overall theme, lighting and staging before coming to Korea.

“What is important is not the amount of time, but the quality of devotion,” he said.

Kim Yo-saeb, a participating dancer, said, “Rigal explains the theme and situation very clearly and then lets us dance freely. Somehow, dancing in our own ways led to the completion of the choreography.”

Rigal’s dance comes to Seoul as part of a tour of 10 cities across the world, including shows in France and Switzerland.