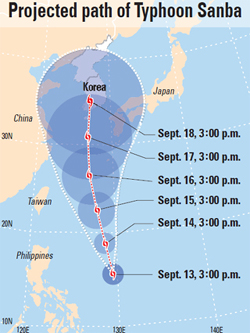 Typhoon Sanba is forecast to reach Jeju Island on Monday before landing on the country’s southern coast in South Jeolla in the morning the following day.

Meteorologists expect the typhoon, heading northwards from eastern Philippine waters as of 3 p.m. yesterday, to be as powerful as Typhoon Bolaven, which churned down the country’s western coast last month.

The Korea Meteorological Administration forecast yesterday that Sanba will reach the sea near Japan’s Okinawa Sunday afternoon after passing the eastern waters of the Philippines.

The Korean Peninsula will begin experiencing affects of the typhoon Monday morning when it reaches the waters near southern Jeju Island. 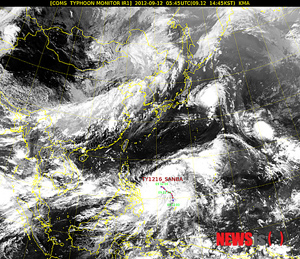 Sanba, the 16th typhoon of the season, is named after an area in Macau.

“Sanba will develop into a stronger typhoon when it passes Okinawa,” said Kim Tae-ryong, an official from the Korea Meteorological Administration. “When the typhoon passes Jeju Island, the winds will be up to 140 kilometers per hour [87 miles per hour].”

The administration forecasts that there will be heavy rain across the nation from Sunday due to the typhoon.

The approach of Sanba comes after several large storms have hit the country last month. Bolaven left 10 dead and more than 200 people temporarily homeless, especially in the southern regions.

Another tropical storm, Tembin, hit the country and brought heavy rain and winds. Kim from the administration, however, noted that the route of Sanba may change depending on anticyclone conditions.

According to the Korea Meteorological Administration, over the past 30 years, there was an annual average of 4.9 typhoons per year of which 0.7 hit the Korean peninsula.