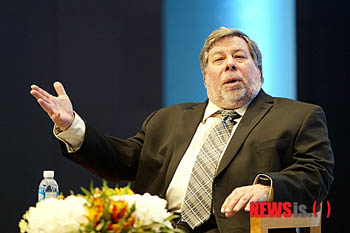 Apple co-founder Steve Wozniak said he plans to get the iPhone 5 and hopes it takes better photos than the ones he captures with his Samsung Electronics Galaxy S3.

“I am always excited about every iPhone product because there are always good advances,” Wozniak said in an interview in Shanghai on Thursday. “A better quality on the pictures will mean a lot, because when I show people pictures on my iPhone 4 and my Galaxy S3, they always say the Galaxy S3, or even the Motorola RAZR, pictures look better.”

Apple, the world’s most-valuable company, on Wednesday (Pacific Standard Time) unveiled a new iPhone that runs on faster wireless networks, boasts a bigger screen and has a chip that handles tasks more quickly than past versions. It is the company’s first iPhone introduction since the October death of Steve Jobs, who co-founded the company with Wozniak in 1976 in a California garage.

The Cupertino, California-based company unveiled a taller, lighter and speedier iPhone that’s poised to become the fastest-selling technology gadget in history - even as competition accelerates in the $219.1 billion smartphone market.

“I think they took some very important steps,” Wozniak, 62, said. “I’d like to get a product, use it myself before I judge it and compare to others. I’d like to have it myself and tell what’s good and bad about it.”

Meanwhile, Apple is seeking to gradually reduce its dependence on Samsung for parts supply in a bid to exert a greater control over its supply chain, a report said yesterday.

The Boston-based investment research firm Trefis said in the report that Apple is moving toward decreasing its exposure to Samsung Electronics and fostering greater supply-chain competition.

The iPhone maker has recently been diversifying its suppliers by roping in Samsung Electronics’ component rivals, such as LG Display and Hynix Semiconductor as well as Japan’s Sharp.

“While the move is being seen by many as prompted by the ongoing patent litigation between the companies, we believe this is more a response to Samsung’s growing smartphone sales, which could lead to a conflict of interest for the company in the coming years,” the Trefis report said.

“With Samsung’s smartphone sales growing at a rapid pace and the company acting as its own supplier in many cases, it could pose an interesting dilemma for Samsung if it were forced to choose between Apple and itself in case of a supply shortage at its factories.”

Samsung and Apple together control more than half of the global smartphone market. In the second quarter this year, Samsung’s market share stood at 32.6 percent, followed by Apple with 16.9 percent, according to market researcher IDC.

The two tech heavyweights have been locked in a series of legal suits, accusing each other of design and technology patent infringements on their respective mobile devices, including Samsung’s Galaxy mobile devices, and Apple’s iPhones and iPads.

Apple is increasingly feeling the need to diversify vendors, as it would mitigate the risk of Samsung prioritizing the supply of its own parts over Apple’s, Trefis said.

Samsung Electronics is currently the sole supplier of microprocessors used in the iPhone and the iPad, with Samsung components making up a significant 26 percent of the iPhone’s total costs, it added.

With demand expected to remain strong with the launch of the latest iPhone 5, it would be essential for Apple to find additional suppliers, giving the California firm more choices, the report said. “Fostering higher competition in the supply chain will give Apple greater bargaining power and help it control the cost of supplies, thereby supporting its profit margins in the longer term,” the investment research firm said.

“As the smartphone market gets commoditized over time, we expect Apple’s iPhone margins to fall, but a greater supply chain control could mitigate the risk to an extent.”