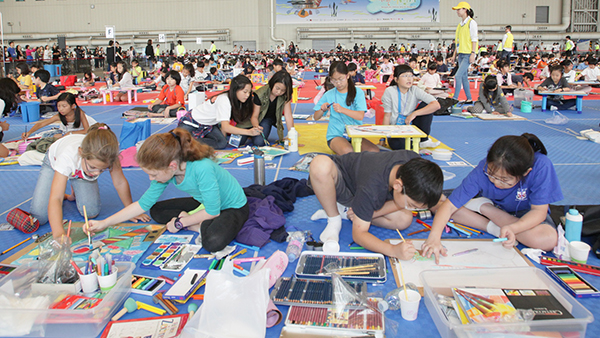 Children from 320 teams, including 20 made up of foreigners, participate in a drawing competition Saturday sponsored by Korean Air. The event has been held for the past three years at the company’s headquarters in Gangseo, southwestern Seoul. Provided by the company


Korean Air believes its proposed takeover of Korea Aerospace Industries (KAI) could lift the nation into the top-tier of aircraft manufacturers, challenging claims the company is not of the caliber necessary to upgrade Korea’s aerospace industry.

The affiliate of logistics giant Hanjin Group is awaiting the second round of the bidding to acquire 41.75 percent share of KAI after its initial bid was nullified due to a lack of competitors.

The law states there must be at least two bidders, but Korean Air was the only participant.

Korea Finance Corporation (KoFC), which is in charge of the sale as the biggest shareholder of KAI at 26.4 percent, said last week that it will consult with other major shareholders - Hyundai Motor, Samsung Techwin, and Doosan Group - so the second round of bids can take place this month.

Choi June-chul, head of Korean Air’s Aerospace Division, which handles aircraft development and maintenance, said Friday that if Korean Air Lines (KAL) succeeds in acquiring KAI in the future it would create a synergy to develop an economy of scale within the national aerospace industry.

“We also have our own ability to develop and design aircraft,” Choi said at the company’s tech center in Busan.

“Most people recognize Korean Air as just a commercial carrier, but from the bottom the company has been putting effort toward developing the entire local aerospace industry.”

Its aerospace division, which was founded in 1976, was previously known for its maintenance and modification work on Korean and U.S. aircraft. But it has expanded to include unmanned aircraft development and satellite and space launch development.

It is now considered to be major supplier of nose, wings, sharklets and empennage components to Boeing and Airbus.

Choi, who also is senior vice president at KAL, said the cutthroat competition between KAI and KAL has been detrimental to the country’s aerospace industry and it needs to end.

For more than a decade, the rivalry has hurt the profitability of each company, he said.

If KAL acquires KAI, the two companies would likely operate separately, much as Hyundai Motor Group is doing with Hyundai Motor and Kia Motors, said Choi.

“There are some overlaps in business, but KAI is specialized in metal material and we are good at handling complex materials,” he said.

“We need to think about these two companies separately.”

It has been reported that the Korean military accounted for 57 percent of KAI’s 1.29 trillion won in sales last year, whereas KAL is currently working to increase sales from commercial aircraft development businesses.

The company plans to achieve 1 trillion won sales in 2015, with 60 percent coming from the commercial development business.