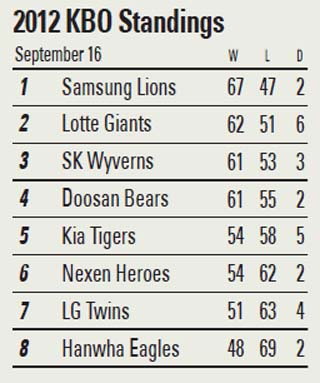 As the top four Korea Baseball Organization clubs battle for position, the also-rans appear to be more concerned with finding scapecoats.

The sixth-place Nexen Heroes yesterday sacked manager Kim Si-jin. Chief assistant coach Kim Seong-gap will take the helm for the remainder of the season, the club said. Kim had re-signed a three-year contract with the club in March.

The Heroes have not made the playoffs since they joined the league in 2008.

The team boosted the expectations of fans when it won eight straight games and was in first place in May. By the time of the All-Star Game, the club was in third place with a record of 40-36-2.

With only 15 games left, the Heroes are seven games behind the fourth-place Doosan Bears.

With the fifth-place Kia Tigers Twins also trailing the Bears by five games, the four playoff teams look pretty well set. But only 2.5 games separate the runner-up Lotte Giants and the Bears. The third-place SK Wyverns trail the Giants by 1.5 games.

The Giants’ home-ground advantage against the Wyverns could be offset by their schedule. The Giants will play seven straight games starting today with no days off.

The games include two against the league-leading Samsung Lions on Friday and Sunday, both in Daegu. With a .588 winning percentage, the Lions are ahead of the Giants by 4.5 games.

Meanwhile, the Eagles’ Jang Sung-ho is bidding to reach the milestone of 2,000 career hits this week. He recorded his 1,999th hit on Friday against the Heroes.

The 2,000-hit plateau has been reached by only two players in the 32-year history of the KBO: Yang Joon-hyuk, formerly of the Samsung Lions, and Jun Joon-ho, formerly of the Heroes. Yang was 38 years old and Jun was 39 when they reached 2,000 hits. Jang is one month away from his 35th birthday.