Shin back on top with Women’s British Open win

Shin back on top with Women’s British Open win 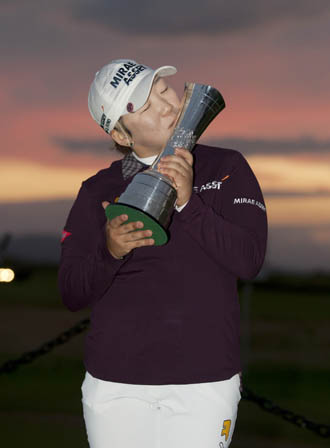 Shin Ji-yai survived a blustery final round to post a record nine-stroke victory in the Women’s British Open Sunday night, marking a full recovery for the former golf queen at the course where her ascent to the top began.

It is the second victory for the 24-year-old Korean at Royal Liverpool, where she rose to glory four years ago as a non-LPGA member.

She finished at nine-under 279, with a nine-stroke lead over runner-up Park In-bee, a fellow Korean who was Shin’s partner during the event. That demolishes the previous record for margin of victory at Sunningdale, set by Karen Stupples of the U.K., who won the 2004 event by five strokes.

Shin built an early lead with an eight-under 64 on Friday, following a one-under 71 on Thursday, and maintained it through the third and fourth rounds that were both played on Sunday due to the weather conditions on Saturday. She posted scores of 71 and 73 in the final two rounds.

“Winning at Sunningdale four years ago was my first big win and changed my life,” Shin told a media conference after Sunday’s victory. “Now I have even more great British Open memories.”

Sunday’s victory, her 10th LPGA career win, is her second record-setting win within a week after she edged out Paula Creamer of the U.S. during a nine-hole, sudden-death match at the Kingsmill Championship in Virginia six days earlier, which marked the longest-ever playoff duel in LPGA history. It is the first time in LPGA history that a golfer has won the British Open after winning the previous week.

The back-to-back win signals that the former No. 1 golfer in the world has now ended a long-running slump. Since her eighth LPGA win at the Mizuno Classic in Japan in November 2010, Shin struggled, in part due to back and hand injuries.

She hauled in four top-10 finishes earlier this year, but a third-place tie at the Canadian Women’s Open last month was more meaningful for her as it came after an operation on her left wrist in June and an ensuing two-month break. Shin has also worked with a new caddie, Florian Rodriguez of France, who she said is helping her relax during the game.

“I hit an even par for 36 holes in this weather, so I’m really surprised and inspired by myself,” Shin said. “This is a really tough course here, so when I finished today, I was just like, wow, I can get a good score on any other course, I’m pretty sure of that.” 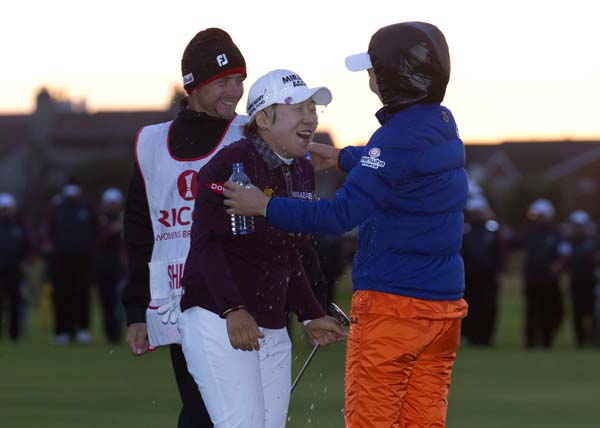 Shin’s latest victory at the Royal Liverpool Golf Club also highlights an increased presence by the Korean contingent in the LPGA.

It is the first time Korean players have won three of the four majors in the LPGA in a single year.

With Chinese Shanshan Feng, who won the other major Wegmans LPGA Championship in June, it’s an Asian sweep.

“I think so many Asian players are playing at the moment on the LPGA tour, so it gives us a big chance to win,” Shin said.

“I didn’t play in the last two major tournaments, but I played in Nabisco and here. Well, I work so hard, I guess that’s why I get this trophy. I know all the other players are doing their best and they work hard, too.”

Park, another 24-year-old, missed four strokes on Sunday for an overall even-par 288, but still finished ahead of Creamer at third at 289 and Mika Miyazato of Japan at 290.

Like Shin, Park is enjoying a solid comeback after a long struggle. She won the Evian Masters in July, her second LPGA win since the U.S. Open victory in 2008.

She has recorded eight top-10 finishes during 17 performances this year, including a runner-up finish at the Canadian Women’s Open, and has earned $1,419,940 this season.

Three other Koreans finished in the top 10 at the British Open, including Ryu So-yeon, who closed with a three-over 291 to tie for fifth with Carrie Webb of Australia.

Kim In-kyung and Choi Chella were tied for 10th at seven-over 295. Choi Na-yeon finished tied for 13th, while another Korean, Jenny Shin, tied for 17th.

Michelle Wie of the U.S. came in at 296 and tied for 13th, while Lydia Ko, a Korea-born Kiwi amateur, who became the youngest player to win an LPGA event with her victory at the Canadian Women’s Open last month, finished tied for 17th with 299.

“I got leading amateur and that’s what I wanted after yesterday,’’ Ko was quoted as saying by The Associated Press.

“I guess I have to be happy about that, and this is my first experience at the British Open, and I did much better than the U.S. Open. So, I can’t say it was a bad day. I had lots of fun playing.”

Webb, who has won the British Open three times, chased Shin by three strokes when she carded a four-under 68 in the third round, before she struggled early on in the fourth round, giving up four strokes in the first three holes.

Shin committed a triple-bogey in the seventh hole of the fourth round, but made amends for it with two birdies in the sixth and seventh holes.

“It was a long, very, very tough day out there,” Shin said.

“But I kept my focus and concentrated on every shot, and when I made the winning putt, it was great.”